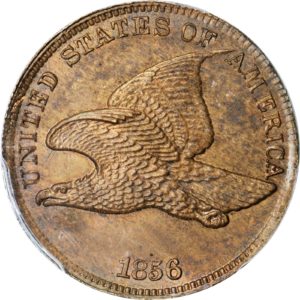 Although the 1856 Flying Eagle cent is technically a pattern, the design was adopted for circulation in 1857, and over the decades the 1856 has come to be collected with the regular-issue 1857 and 1858 Flying Eagle varieties. The popularity of the issue is due largely to its minuscule mintage, an estimated 2,000 pieces (per the Guide Book), by far the lowest production figure of any date in the small cent series. The acquisition of an example is a landmark event for any collector, especially for examples preserved this beautifully.

The obverse motif was adapted from the Flying Eagle featured on Christian Gobrecht’s silver dollars of 1836 through 1839. The reverse wreath is almost identical in style to the gold dollars and three-dollar gold pieces of 1854 and later years. Walter Breen in his Encyclopedia recognizes four distinctly different reverses found on Flying Eagle cents of the year.

In More Adventures with Rare Coins, author Q. David Bowers devoted an entire chapter to this popular American rarity and its significance to several generations of collectors. Briefly told, this rare small cent captured the interest of America’s fledgling collecting community at a very early date, certainly by early 1857 when the regular issue Flying Eagle cent made its debut in circulation as a replacement for the familiar large copper cents of 1793-1857. The appearance of the new small cent issue sparked a nationwide interest in saving old coppers directly from circulation, with many people who had never felt a spark of numismatic interest suddenly plucking the old coppers from circulation in an effort to assemble a date set. In fact, within a few years, several numismatic societies were formed, and numismatic books were published. Those who were already ardent collectors of U.S. coins took an instant liking to the Flying Eagle cents of 1856, as well as those of 1857 and 1858, and even the Indian cents of 1859. However, although collectors of that era knew 1856-dated Flying Eagles cents had been produced, virtually no cents of that date were to be found in circulation, thus becoming an object of great desire by as early as 1859, when the marketplace cost of such pieces was $1 each. At 100 times face value, even the “common man” no doubt looked for 1856-dated small cents in pocket change. After all, a dollar was a good day’s pay to the general population in that era. Accordingly, to meet demand, the Mint produced many more 1856-dated Flying Eagle cents — the pieces currently called restrikes — the end result being that today there are probably close to 2,000 1856 Flying Eagles in existence, or as Dave Bowers noted “few enough to make them rare, but enough to make them collectible.” Bowers also noted “a good case can be made for the 1856 Flying Eagle cent to be the foremost popular rarity of all 19th-century American coins.”

Arguably the most popular of all small cent rarities, certainly a date and issue whose fame is widespread within the numismatic community. Many of us in today’s hobby cut our eyeteeth on the Flying Eagle and Indian cent series, and who among us has not dreamed of owning a gem 1856 “Flyer?” Current wisdom has it that perhaps 1,500 to 2,500 1856 Flying Eagle cents were struck, some in 1856, and others over the course of the next several years. Initially produced to influence congressmen and others of the need for and utilitarian size of small cents to replace the old circulating coppers, they were later produced for collectors and others. Regardless of the actual number produced, this date has always been a prized rarity in U.S. numismatics, almost since the date of inception. Attractive Gem 1856 Flying Eagle cents don’t come cheaply in today’s numismatic marketplace, but on the other hand, they never have.

By the mid-1850s American children and adults had grown up with the old copper “large” cents that had been in circulation ever since their introduction in 1793. The change to the lightweight, small-diameter, lightly hued copper-nickel cent would require some education Mint officials figured.

Accordingly, beginning in late November 1856, approximately 1,000 or more 1856-dated pattern Flying Eagle cents were struck for distribution to newspaper editors, congressmen, and others of influence, with some coins held in reserve for distribution to numismatists. Included in the dispersal were one to each senator and representative, four to President Franklin Pierce, about 200 to the Committee on Coinage, Weights and Measures, and other pieces to Treasury Department officials. However, it seems apparent that any congressman who wanted a few extra pieces had no trouble getting them. Exactly how many promotional pieces of the 1856 Flying Eagle cent were struck in 1856 and early 1857 is not known, and it could have been far in excess of 1,000 coins.

These initial specimens of the 1856 Flying Eagle cent were of the “Uncirculated” or circulation-strike format, not Proof, and were intended to be similar in finish to what the average citizen would see when mass production of the new format began. The “advertising campaign” was a success, and the Act of February 21, 1857, was signed into law, making the copper-nickel Flying Eagle cent a reality.

Word of the curious, interesting, new, little 1856 Flying Eagle cents spread, and these coins began to have a premium value among the small but rapidly growing community of coin collectors. Specimens soon traded for 50¢ to $1 each when they could be found, which was not often. By 1859, Edward D. Cogan sold a copper-nickel specimen for $2. As $2 was more than a day’s pay for many people in the late 1850s, this was indeed a significant premium.

Around the same time the Mint was busily engaged in restriking rarities for collectors. In 1859, Director James Ross Snowden offered such numismatic delicacies as recognized rarities, Proofs, patterns, and low-mintage coins in exchange for Washington medals and other desired items. Such trades were pleasing to Mint officials and collectors alike.
In addition to whatever rarities Snowden and his close associates may have made, it is likely that others also had access to dies and coining equipment at the Mint and sought to feather their own nests (quite literally when it came to Flying Eagle cents) by producing rarities for their own accounts.

Whatever the unrecorded circumstances may have been, during the late 1850s and early 1860s — probably from about 1858 and continuing through the early years of the Civil War — additional 1856-dated Flying Eagle cents were struck, but apparently from original obverse dies (there is no evidence that new dies were made after early 1857). The year a particular reverse die was made — 1856, 1857, or 1858 — made no difference as reverses bore no dates and superficially looked alike. While three of the reverse dies used to coin 1856-dated cents seem to be contemporary with 1856, a fourth is of a style first used in 1858.

At the time, it was felt by collectors that Proof was a better finish than Uncirculated (Mint State). Thus, all of the restruck 1856 cents were made with prooflike or even full Proof surfaces by resurfacing existing dies. However, the surface of these Proofs was not quite as deeply mirrored as would be the Proofs of the 1857 and 1858.

Exactly how many Proof 1856 Flying Eagle cents were restruck is not known. The truth may be around 1,500 to 2,500 coins. Today, Proof 1856 Flying Eagle cents are much more plentiful than are frosty-surface Mint State coins, the latter being originals from the distribution in 1856 and early 1857 to congressmen and others. Clouding the situation is the fact that many Proof coins have been certified as Mint State and that in any event for many specimens there is no sharp delineation as to what constitutes a Mint State coin and what defines a Proof. Thus, population reports are of little help to the specialist seeking information.