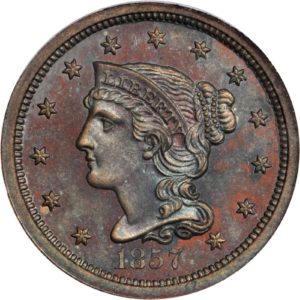 Beginnings and endings have a profound attraction to collectors. The first and last dates of any series of United States coins exercise a fascination unlike that of any intermediate dates, rare as these may be. The first dates tend to get the most attention, perhaps because they heralded the arrival of something new and wonderful.

The last date may evoke a more nostalgic frame of mind, like the red lights at the end of a freight train receding into the dark of night. The U.S. large cent series is a perfect example of this principle. The cents of the first date, 1793, are the stuff of legend, presenting three major types and numerous varieties, nearly all commanding significant prices in virtually any grade.

As large cent coinage drew to a close 64 years later, the picture was dramatically different. The Philadelphia Mint, a struggling infant in 1793, was a powerhouse of production by 1857. Modern steam coining presses churned out a cataract of mathematically exact, technically perfect coins in gold, silver, and copper alloy.

The Coronet Head design by Christian Gobrecht had been used for cents since 1839. The basic type went through two relatively minor changes, referred to in the Guide Book of United States Coins (the “Red Book”) as the Petite Head of 1839-1843 and the Mature Head of 1843-1857. This was a well-balanced design with a Liberty head facing left, her hair secured in a bun with beaded cords, a coronet or diadem inscribed LIBERTY above her forehead. She was surrounded by a circle of 13 six-pointed stars with the date below.

The reverse offered a circular wreath tied at the base enclosing ONE CENT, surrounded by the legend UNITED STATES OF AMERICA. Cents of this design continued to be struck until January 1857, offering none of the really dramatic varieties of the early dates, whose dies were laboriously produced by punches and hand engraving. This was no doubt disappointing to later generations of numismatists, but allowed wholesale production with few interruptions or delays.

Through the 1850s the Mint sought a replacement for the copper large cent. The public reportedly found the 28.5 millimeter size and 10.89 gram (168 grain) weight inconvenient, and the cost of producing a single cent prevented any profit (seignorage) from accruing to the Mint. By 1856 Mint Director James Ross Snowden had fixed on a new 19 mm, 4.67 gram copper-nickel Flying Eagle cent, and the old large cent was doomed.

Reportedly 333,546 large cents were struck bearing the date 1857, before their coinage was cut short by passage of the Act of February 21, 1857 ushering in the new Flying Eagle coinage. James Ross Snowden claimed most of the newly struck large cents were melted, but it seems certain that the public hoarded enough to assure a reasonable supply of high-grade examples for future generations.

The great cataloguer of all later dates was Howard Rounds Newcomb (1877-1945). He was a profound student of certain of the earliest dates (1795 through 1803) before publishing his major study, United State Copper Cents 1816-1857, through Stack’s in 1944, only a year before his death. Despite critical World War II paper shortages, Joseph B. and Morton Stack managed to publish this amazing book, with its pages hand-lettered like a medieval manuscript by the tireless Newcomb.

Newcomb discerned five varieties for 1857, one Large Date and four Small Date. He relied on somewhat subjective descriptions including “over right edge of a denticle… slightly right of the center of a denticles… over left edge of a denticle.’’ Such descriptions presupposed that the reader was looking at a crisply struck, high-grade coin, because lesser grade pieces quickly became virtually unidentifiable.

The more recent Attribution Guide for United States Large Cents, 1840-1857, by the late Jules Reiver and J.R. Grellman, defines the 1857 varieties more precisely with individual drawings and more intelligible verbal descriptions. The Large Date, Newcomb-1, is defined by its “Rectangular lump (actually the top of a stray 1) between dentils under the left side of 8.”