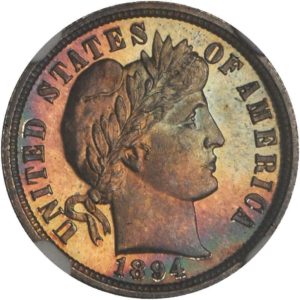 In 1893 Augustus G. Heaton, a professional artist by trade and a numismatist by avocation, published his Treatise on Mint Marks. At the time the presence of a “CC” (for Carson City, Nevada—a mint operated from 1870 to 1893), or an “S” on a coin (for the San Francisco Mint which was established in 1854), or other mintmarks, attracted little interest. In fact, there was no catalogue or guide listing which mintmarks were available! This seems incredible in view of values attached today to certain rarities bearing tiny mintmarks.

This book precipitated a strong interest in collecting coins by mintmarks, especially the silver issues, as few were interested in gold coins at the time. Barber dimes, quarters, and half dollars, and, to a lesser extent, Morgan silver dollars, grew in popularity.

The 1894-S dime, famous in its own era and today remaining as one of America’s best known rarities, has been attracting lots of attention in recent times, including a book by Kevin Flynn and an article by him in Coin World. The latter precipitated a round-robin of research discussion on the Internet, bringing to the fore various theories.

We invited Kevin Flynn to share information for readers of the Numismatic Sun. From this we have selected some abstracts giving information about the mintage and distribution. Then comes an interesting letter found by Nancy Oliver and Richard Kelly.

“On June 9th, 1894, 24 dimes were struck at the San Francisco Mint from a single set of obverse/reverse working dies. Of these 24, two were sent to the director of the Mint in Washington, D.C. on June 9th, 1894 as part of the special assay. On June 25th, 1894, two 1894-S dimes are listed as part of the coins assayed during the month of June of 1894. This left a net quantity of 22 coins. On June 28th, 1894, a single 1894-S dime was sent to the Superintendent of the Philadelphia Mint as part of the annual assay. As part of the assay process, this coin would have been melted, leaving a net of 21 coins. It is possible that several other 1894-S dimes were assayed by the San Francisco Mint, but no evidence of this has been found.

“The Chief Coiner Charles Gorham received two or three specimens in June 1894, and sold them in 1895 for $25 or more per coin. In an article in The Numismatist in 1928, Farran Zerbe stated that in 1905, he was told by an individual at the San Francisco Mint that two or three pieces were obtained by Mint people just to have a new dime, and that once it was found to be rare, sold to collectors for $25 or more each. These coins saved directly by Mr. Gorham, are most likely the two specimens obtained by John M. Clapp before 1900. Gorham was the melter and refiner in 1905, and the only individual left at the San Francisco Mint who would have had direct knowledge of these facts.

“In my opinion, the remaining 15 or 16 1894-S dimes were released into circulation with 1893-S dimes. Only nine 1894-S dimes are verified to exist today. The 24 1894-S dimes were listed in the 1895 Annual Report of the Director of the Mint. Several collectors who read the Report and wrote to the San Francisco Mint received the confirmation that only 24 were struck, but none remained at the Mint.

“The first recorded numismatic sale was in 1933 by B. Max Mehl. The first public auction of an 1894-S dime was held in 1945 by the Numismatic Gallery (Abe Kosoff and Abner Kreisberg). “

Nancy Kelly and Richard Oliver, who have published much on San Francisco Mint history, located the following newspaper article, first printed in the San Francisco Bulletin, then widely circulated in the United States in October and November 1895:

“Whoever has a dime of 1894, coined by the San Francisco Mint, has a coin for which $5 has already been offered, and when all the facts are known regarding its scarcity it is not unlikely that it will command a much higher premium. Inquiry at the mint elicited the information that during the fiscal year of 1894 only twenty-four dimes were coined at the San Francisco Mint. How this came about was told by Chief Clerk Robert Barnett.

“ ‘All undercurrent subsidiary coins, viz., those containing other than the design now being used when received at the Sub-Treasury, are not again allowed to go into circulation, but are sent to the mint to be recoined with the current design. In the course of the year 1894 we received a large sum in these coins, but having an ample stock of dimes on hand, it was not intended to coin any of that denomination in 1894. However, when nearly all of this subsidiary coin bullion had been utilized, we found on our hands a quantity that would to advantage only into dimes and into dimes it was coined, making just twenty-four of them.

“ ‘My intention was first drawn to the matter particularly but the receipt of a letter from a collector somewhere East requesting a set of the coins of 1894. In filling this order I found there were no dimes of that date on hand. Subsequently I received quite a number of similar letters, and in each case was, of course, unable to furnish the dimes.

“ ‘Plenty of dimes were coined that year at the Philadelphia and New Orleans mints, but there are many collectors who accumulate the coinage of each mint, as each has its distinguishing mark. Those coined here bear a letter ‘S’ under the eagle. New Orleans used the letter ‘O’ and Carson City the letter ‘C’ while Philadelphia coins are identified by the absence of the letter.

“ ‘We receive each year about fifty requests from coin collectors for coins, mostly for those of silver.’ ”

To the Fore in Numismatics

The 1894-S dime did not receive much notice until the 1940s, after which the low mintage figure of 24 pieces, published in the Guide Book of United States Coins, brought the coin into focus. Even then, fame remained elusive. In 1957, Dave Bowers, who had been studying the numismatic history of the issue, thought it undervalued. At the Empire Collection sale conducted by Stack’s in that year, Jim Ruddy, acting as agent, secured a gem specimen for $4,750, a record price. Newspapers nationwide picked up the story of a college kid paying $4,750 for “one thin dime,” and before long Dave was a guest on the NBC Today Show, explaining how such a coin could be so valuable. He received over 6,000 letters from people who had old coins, including many that were “even earlier than your 1894.” Not long afterward Bowers sold it to Honorable and Mrs. R. Henry Norweb.

Dave bought and sold a few other examples of this coin, then in 1996 catalogued the Eliasberg Collection example. The historical notes appended to the description included the following (excerpt):

“The 1894-S Barber dime has been the subject of numerous comments, accounts, catalogue descriptions, and articles. Mint records state that only 24 were struck, but no documentation giving particulars as to the circumstances of manufacture or distribution of the pieces has ever surfaced. Thus, the 1894-S has been wreathed in mystery, always a good ingredient for numismatic interest, publicity, and desire for ownership. It is believed that only nine exist today. The most recent authoritative article on this rarity, William A. Burd’s “The Inscrutable 1894-S Dime,” The Numismatist, February 1994, lists the known examples, two of which are well worn. This was a watershed study in the annals of this coin, as previously the population was estimated as being closer to a dozen, perhaps even 13 or 14. William Burd’s data, being of relatively recent publication, have not yet been fully appreciated by the market and will probably have a dramatic impact on the future pricing structure.

“Reasons given for making just 24 1894-S dimes include “balancing the Mint books by clearing a $2.40 item” and “testing the dies.” Walter Breen (Encyclopedia, 1988, p. 323) suggests that John Daggett, superintendent of the San Francisco Mint, struck the 24 pieces, all Proofs, as a favor for banker friends. Breen went on to comment:

“ ‘Each of eight persons received three; Daggett gave his three to his daughter Hallie, telling her to put them away until she was as old as he was, at which time she would be able to sell them for a good price. On the way home the child supposedly spent one for a dish of ice cream, but kept the other two until 1954, when she sold them to coin dealer Earl Parker.…’

“This somewhat enchanting “ice cream story” seems to have been of rather recent origin, and the cataloguer (QDB) does not recall having heard it decades ago, despite studying 1894-S dimes for many years.

“When Augustus G. Heaton’s Mint Marks monographs was printed in 1893, the 1894-S, of course, was still in the future. In the March 1900 number of The Numismatist, Heaton updated the work with an article, “Late Coinage of the United States Mint.” in which he noted this:

“ ‘The San Francisco Mint takes proudly to itself the sensation of later U.S. coinage in striking but $2.40 worth of dimes, or 24 pieces in all, in the year 1894. Of these, the writer possesses the only one known to the numismatic world.’

“At the very least, this suggests that by very early 1900 Heaton was not aware of any examples in private collections and that the San Francisco Mint was proud of its accomplishment and related details to Heaton. Apparently, the other 23 were held by persons other than collectors. Heaton told no more. Farran Zerbe, who at the turn of the century was just beginning to travel around the United States to visit mints and collectors claimed to have much information on the 1894-S dime and also the mysterious 1873-S Liberty Seated dollar (no example of which is known today), but if he did, it was not committed to the printed page. Over a period of time the 1894-S became better known and was enshrined in the Pantheon of famous American rarities.”