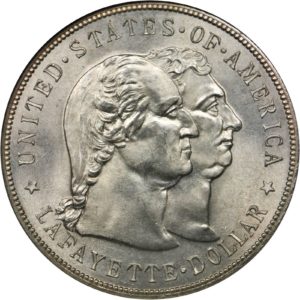 Recently we came across a tattered slip, taped long ago, but still readable, shown here. This was sent out by Edwin A. Potter, Treasurer of the Lafayette Memorial Commission, operating from the American Trust & Savings Bank in Chicago. By this time 50,000 had been coined for distribution, but they were said to have been selling well, as the supply was becoming “rapidly exhausted.” With some crossouts on the form, it is stated that 32,000 have been sold, 8,000 are available, and 10,000 were to be sent to Paris. The announcement is exciting, with 15,000 available, then crossed out with 10,000 available, now with only 8,000 remaining.

To back up a bit, on December 14, 1899, the 100th anniversary of George Washington’s death, 50,000 Lafayette commemorative dollars were struck on this single day, from multiple die pairs that had been made by hand, by punching in the individual letters. This process was completely out of date in comparison to what was going on elsewhere in the Mint, and is unprecedented in terms of Legal Tender coinage of that era or anything close to it. Apparently there was a great rush to get the coins made, and the normal process of hubs and masters was not used.

The coins technically do not bear the date of issue, as it was stated that the 1900 year given represented the date of the Paris International Exposition, not the date of the coin. Today the coins can either be considered as dateless, or if dated 1900, then prestruck.

A great campaign was mounted to sell them, including through schoolchildren, for $2 each. Apparently by the time this notice was sent out, 32,000 had found buyers, leaving 18,000 to go. What happened after then is not quite certain, but sales of the 10,000 coins shipped to Paris must have been negligible. In any event, thousands of Lafayette dollars remained unsold, and were stored in bags of 1,000 each in a vault in the Treasury Department in Washington, as illustrated on a 1904 postcard shown below. The Lafayette dollars are on the floor at the bottom center. Believe it or not, these dollars remained in the Treasury Department for decades, then in the 1940s were melted. About that time, Aubrey Bebee, a well known Chicago rare coin dealer (who later moved to Omaha, Nebraska) learned that the Treasury had unsold coins and sought to buy them. He was advised shortly after his inquiry that the pieces had just been melted!

Today the distribution is given as 36,000 coins, which means that after the notice was sent out, only 4,000 more were ever sold—including to the general public in the United States and to visitors to the exposition in Paris.

Today the Lafayette dollar is popular with numismatists, and in higher grades is quite scarce.