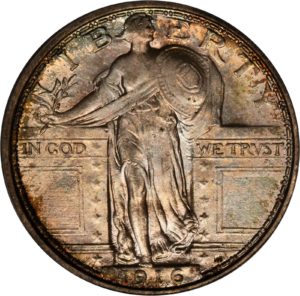 The rarity of the 1916 Standing Liberty quarter is somewhat of a mystery, this despite the recorded mintage of only 52,000 pieces. Even so, one might think that the novelty of the first year of issue would have resulted in pieces being saved by the public. Not so. It appears that these were generally ignored. A few dealers, namely John Zug, Henry Chapman, and William K. Pukall, set aside small numbers of these for inventory, probably not more than a few hundred totally, these probably accounting for most Gems known today. Otherwise, the pieces slipped into circulation. It may have been that the 1917 quarters were released in quantity prior to the 1916, or there may be some other explanation. We have long searched for newspaper clippings regarding this, and would be interested if any one has contemporary comments (published in 1916) about the new quarter dollars, apart from information issued by the Mint.

It was not until the 1930s that collecting by date and mintmark varieties became popular, this with the advent of the Raymond “National” holders (made in Shippensburg, Pennsylvania by M.L. Beistle). Later, others produced albums and folders, most notably Whitman Publishing Company in Racine, Wisconsin. In 1930 there was little market interest in the 1916 Standing Liberty quarter. Quickly the 1916 Standing Liberty quarter was recognized as a key issue, a major rarity in the context of the 20th century, a status that it has maintained undiminished since then.