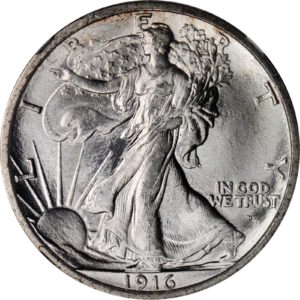 In 1916 the Treasury Department decided to redesign the current American silver coinage, which consisted of the dime, quarter dollar, and half dollar (the silver dollar not having been coined since 1904). Instead of relying upon the Mint’s engraving staff, invitations were sent out to leading sculptors and artists, following a trend that had been initiated by President Theodore Roosevelt in 1905 when he arranged with Augustus Saint-Gaudens to re-design the coinage. After that time, private artists produced a variety of issues, including the 1908 quarter eagle and half eagle (Bela Lyon Pratt), the 1909 Lincoln cent (Victor David Brenner), and the 1913 “Buffalo” nickel (James Earle Fraser). By 1916 the Mint also had utilized artists from the private sector to do certain Panama-Pacific International Exposition coins, most notably Robert Aitken’s work on the immense $50 octagonal and round pieces.

In 1916 two artists were finalists in the silver coin competition: Hermon A. MacNeil—whose 1916 Standing Liberty quarter dollar is discussed as Adventure No. 16—and Adolph A. Weinman. The latter artist designed the “Mercury” dime and the present Liberty Walking half dollar.

The result was a design that is still acclaimed today for its beauty and is high on the list of numismatic favorites. In fact, in 1986 when the Treasury Department sought a motif for its silver “eagle” bullion coins it reached back to the 1916 Liberty Walking half dollar as the best motif in its repertoire.

The obverse motif shows Miss Liberty walking according to popular nomenclature, or striding. The 1916 Mint Report commented as follows:

The design of the half dollar bears a full-length figure of Liberty, the folds of the Stars and Stripes flying to the breeze as a background, progressing in full stride toward the dawn of a new day, carrying branches of laurel and oak, symbolical of civil and military glory. The hand of the figure is outstretched in bestowal of the spirit of Liberty. The reverse of the half dollar shows an eagle perched high upon a mountain crag, his wings unfolded, fearless in spirit and conscious of his power. Springing from a rift in the rock is a sapling of mountain pine, symbolical of America.

Coinage of half dollars in 1916 took place at all three active mints: Philadelphia, Denver, and San Francisco. The branch mint issues bore the letters D or S on the obverse, a mintmark position not seen in the half dollar series since the illustrious New Orleans coins of 1838 and 1839. In 1917 the same procedure was followed for a time, after which, part way through the year, the mintmarks were relegated to the reverse, where they remained for the duration of the series.

From 1916 through 1921 half dollars were issued with great regularity at each mint in each year. In the last named year the mintages were very low, due to prevailing economic conditions in America.

The year 1922 was skipped entirely for circulation strike mintage, with the next production being the 1923-S. After that there was no Liberty Walking half dollar coinage in 1924, 1925, or 1926, production only at the San Francisco Mint in 1927 and 1928, only at the Denver and San Francisco mints in 1929, and no mintage at all from 1930 to 1932. It is interesting from a historical viewpoint that certain dates of the 1920s for which circulation strike half dollars were not made did, however, see some commemoratives.

In 1933, Liberty Walking half dollars were made only at San Francisco. Then, beginning in 1934, production became regular once again, at all three mints, a procedure kept up through 1938, when the San Francisco issue was omitted. From 1939 onward coinage was continuous more or less, except there was no 1940-D nor was there a 1947-S.

Numismatic interest in Liberty Walking half dollars began in a big way in the mid-1930s, coincident with Wayte Raymond’s offering of his “National” coin albums, which made such coins interesting to collect in order and display. By this time most of the earlier issues had long since slipped into circulation. Today, numismatists recognize that the majority of issues from 1917 through 1929 are indeed elusive in Mint State. Issues of 1916 are by no means plentiful, but more seem to have been saved due to the first year of issue.

In general, the series can be divided into early and late issues. The first comprises those dated 1916 to 1929, this range including many challenges. None were struck from 1930 through 1932. The second range extends from 1933 to the end of the design in 1947. Each of the dates and mints within this period is readily found, except that in higher Mint State levels certain of the pieces of the 1930s are expensive. Issues of the 1940s are sometimes collected as a “short set.” These are easily found in grades such as MS-63 and MS-64 and if selected with care are very beautiful to contemplate.

While the design of the 1916 half dollar was at once elegant and appealing, and garnered many paragraphs of praise from coin collectors and artists, at the Mint there were great difficulties experienced in striking the pieces up fully. As a result, the vast majority of all Liberty Walking half dollars have some lightness of strike in the higher parts, particularly the center of the obverse in the highest relief, including the skirt lines. Today, the astute buyer of Liberty Walking half dollars has at least four considerations determining the value of one of these pieces:

Grade: Numerical or technical grade, expressed as MS-60, MS-61, and so on.

Striking quality: Typically expressed as “average,” “better than average,” or “sharp.” However, the latter category is rarely needle-sharp, as such pieces simply weren’t made for certain of the issues.

Rarity: Frequency of appearance at a given grade, sharpness, and aesthetic appeal.

In general, Philadelphia Mint pieces are more sharply struck than are those at the branch mints. This was due to spacing of the dies in the coinage press, a situation that has a counterpart in other denominations, most notably the Buffalo nickel series (in which Philadelphia pieces are generally decently struck, and Denver and San Francisco mint issues vary considerably).

Don Taxay in U.S. Mint and Coinage notes: “Most specimens issued prior to World War II are too weak to show the striated (for red) stripes, the branch hand, or Miss Liberty’s headgear.” Similarly and more dramatically, Walter Breen has written that the only issues that are really sharp strikes are certain 1916 and 1917 Philadelphia Mint coins and Proofs minted from 1936 and 1942 (and, note that he did not say these were fully struck). Thus, circulation strikes within the entire series exist in varying degrees of sharpness to mount a challenge to the discerning specialist, with the completion of a completely sharply struck set an impossibility. To paraphrase Dr. William H. Sheldon, this is like playing a round of golf in 18 strokes; in theory it is possible, but no one has ever come close to doing it.

While cherrypicking for quality is important in just about every series, for 1916-1947 Liberty Walking half dollars it is especially challenging.