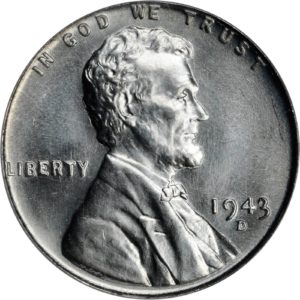 Ever since the spring of 1864, the standard composition for one-cent pieces had been bronze, a composition mostly of copper with small amounts of tin and zinc. Indian Head cents from 1864 to 1909 were made of this alloy as were Lincoln cents from 1909 onward (to 1982).

In 1943. America had been at war with the German Nazis, the Italian forces of Benito Mussolini, and the minions of Japanese Emperor Hirohito since December 1941, and played a supportive role with Great Britain even before that time.

At the three United States mints coinage totals were at a record high, spurred by the needs of an inflationary economy in which money was common and goods were scarce. Seeking to concentrate on the wartime effort and also the home front, the Treasury Department made several changes. Proof coins, made for collectors each year, were discontinued in 1942. Such frivolities could be put off for the present. Nickel, a strategic material in short supply, was removed as a component for the five-cent piece and replaced with a new alloy including silver—the latter metal being in great abundance (federal stockpiles were high and hundreds of millions of silver dollars were stored in Treasury vaults).

In 1942 attention was given to replacing the bronze cent. Pairs of test dies for a cent-size medalet were sent to several different makers of metals and plastics, and experiments were conducted. Finally, in 1943 it was decided that cents would be made of steel discs or planchets coated with zinc to give them a lustrous surface. The plan was put in place, and over a billion such coins were made:

The mints encountered great difficulties with the hardness of the steel planchets. Further, when released into circulation the cents quickly became spotted and stained, in a word, ugly.

In 1944 the mints went back to a copper alloy made from recycled shell cases and other copper materials, thus isolating the 1943 cents as curiosities in the spectrum of American numismatics.

The December 1943 issue of The Numismatist noted that resumption of copper alloy for cent coinage would begin at an early date. Further:

The new alloy will contain slightly less copper and slightly more zinc than the peacetime formula, but the coin will be quite similar in appearance to the traditional cent. It will work satisfactorily in vending machines, being just lighter in weight than the standard bronze, and a trifle heavier than the steel substitute.

Mrs. Nellie Tayloe Ross, Director of the Mint, said that experiments recently conducted with the recovered shell cases and added virgin copper proved the alloy satisfactory for coinage. Treasury officials and officials of the War Production Board have been collaborating for several weeks in working out details of the allotment of sufficient copper, including the scrap shells, to permit return to the copper-alloy coin.…

The Mint will use as a base for the new cents small arms cartridge cases recovered by military authorities from proving grounds, firing ranges and other training areas for troops. These cases consist of 70% copper and 30% zinc, and if melted down with enough virgin copper to bring the copper content up to 85% or 90%, the alloy is adaptable to coinage.

The former bronze coin consisted of 95% copper and 5% zinc and tin. The amount of copper needed will be about half that required for the all-virgin copper alloy. The Mint project will have an important place in the salvage of war-wasted materials.

When zinc coated steel was adopted for the one-cent piece it was the only metal obtainable for the purpose. Arms plants were facing shutdowns because of the metal scarcity. The War Production Board had withdrawn an allotment of copper to the Mint. Coins of zinc, coins of plastics and coins of all sorts of alloys and materials were considered, and ruled out in turn as consuming critical items in the military economy. Meantime, demand for coins continued at an unprecedented rate. The cent of low carbon steel, coated with zinc to prevent rust was specified with the approval of Treasury Secretary Morgenthau and Donald M. Nelson, chairman of the War Production Board, after the Congress had passed permissive legislation at the end of 1942.

The zinc-coated steel Lincoln cents minted in 1943 remained common in circulation for years afterward. I recall that in 1952-3 when I became acquainted with coin collecting it was common for merchants and citizens to keep a cigar box or other container in which to toss steel cents when they were found. By that time most were dull gray and not at all attractive.

In the late 1950s, or perhaps it was the early 1960s, someone developed a procedure for “processing” these ugly pieces and making them fairly bright and attractive—normally a numismatic no-no, but in this instance acceptable to most of the collecting community as long as they were described as “processed.”

Perhaps of all of the numismatic souvenirs of World War II, the steel cents of 1943 are the most distinctive and ubiquitous today. Here is a highly affordable coin that anyone can own easily.