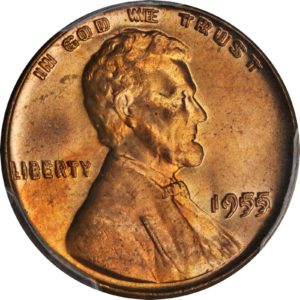 David Bowers knows first hand how rare coins like this are, having been pivotal in the market for them years ago; a section was devoted to the 1955 Doubled Die cent in his first book,Coins and Collectors, 1964. He states:

“In connection with delving into the origin of these pieces I contacted the Mint. I learned that on one day in 1955 several presses were busy stamping out Lincoln cents. As the containers behind each press were filled, they were dumped into a common bin, along with the output from other presses. Somewhat later in a particular day a press operator noticed that the cents being produced by one press were “blurry” on the obverse. The press was stopped, and the die removed. By that time about 44,000 coins had been struck from the die, of which about 24,000 had been mixed with others. About 20,000 remained near the press. These were destroyed, but it was decided to let the others go. At the time there was scarcely any interest in mint die oddities. Accordingly, it was not particularly unusual to simply dismiss the “blurry” coins and let them go.

“Soon thereafter these pieces reached distribution and began popping up in several geographical areas, notably in and around Boston, separately in the western part of Massachusetts around Great Barrington, and, important to the present discussion, in the triple cities area of New York State, this encompassing the towns of Binghamton, Johnson City, and Endicott. In the later location, Jim Ruddy conducted the Triple Cities Coin Exchange, a modest operation that bought and sold rare coins and, occasionally, rare stamps. Jim had been active in the business for a couple of years, was enthusiastic, and later (in April 1958) would form the Empire Coin Company with the writer. At the time, cigarettes sold in vending machines were wrapped in cellophane and cost 23¢ each. To facilitate the giving of change, the packager put two mint-fresh Lincoln cents under the cellophane of each, so that when a quarter was deposited, a pack would be vended along with an appropriate refund. It so happened that quite a few of these particular cents were from the doubled die batch! Some interest was shown locally, and Jim Ruddy became quite excited. At first he offered to pay 25¢ each for them, but after acquiring a few dozen, often brought in with cellophane wrapping, he was fearful that they couldn’t be resold, and stopped buying! At the time he did not know whether a million were in the offing, or just a few. Nobody knew.

“At meeting of the Triple Cities Coin Club (Johnson City) and elsewhere, interest continued to grow, but on a small scale. Soon Jim’s supply was depleted, but few more were to be had, except those found in change. In time, word of the coin spread further, such as to members of the Empire State Numismatic Association. Still, there was little notice of it. Eventually it was mentioned in Numismatic News, where it was at first called the ‘shift cent,’ and, around the same time in the Numismatic Scrapbook Magazine. By 1958 and 1959, when Empire Coin Company was well under way, the variety was quite well known. The designation ‘Doubled Die’ came from its eventual listing this way in the Guide Book, at which point all bets were off and demand multiplied a hundred fold. Now, everyone wanted one.
“As to my own experience, at one time Jim Ruddy and I had over 800 of them, the result of a mini advertising campaign we conducted in the newspapers, plus solicitations from dealers. Nearly all of these were in what would be called Extremely Fine or AU grade today. Only a few showed mint brilliance. These were soon sold, and, in time, an inventory added to, but never any quantity like this. In fact, in later years we were lucky to have even two or three at a time.

“Today, a few thousand 1955 Doubled Die cents are estimated to exist, most in grades from EF to AU.”

One day in 1955, in the die shop at the Philadelphia Mint, a working die for Lincoln cents was given two blows from a master or hub die, the second somewhat out of register, creating a die that had double effects, the date reading 11995555, another word appearing as LLIIBBEERRTTYY, and with the inscription IINN GGOODD WWEE TTRRUUSSTT. Apparently the blunder was not noticed at the time, and in due course the die was fitted into a coining press. Production commenced as this particular press along with others in the same room stamped out a coppery cascade of new coins. Every once in awhile the output from each press, which was fed into a bin behind the press, was collected and put into a large hopper.

Somewhat later an attendant or technician noticed that cents from one particular press were blurry and out of focus when looked at! It was quickly determined that the die had been made in error, production was stopped, the die was removed, and the cents and the pieces behind the press, about 20,000 all told, were taken and set aside to be melted. A discussion was had with the superintendent as to what to do with an estimated 24,000 such pieces that had been made earlier and were now mixed with the output from other presses. It was decided that in the best interest of productivity those should simply be allowed to be counted, bagged, and paid out. Actually, there wasn’t much reason to think otherwise, this being in an era in which Mint oddities were often called “freaks,” and, in any event, when no thought was given to such pieces being of interest to collectors.

In due course, these estimated 24,000 pieces, coins we know now as the 1955 Doubled Die Obverse, were shipped to various banks and destinations, namely in three areas: in Boston, Massachusetts and in the western part of the same state (near Great Barrington and Stockbridge), as well as in what is called the Southern Tier of New York State, the area embracing the towns of Endicott, Johnson City, and Binghamton. The coins were routinely passed out into circulation. Again, no notice was taken of them.

In the meantime in 1953 in Johnson City, James F. Ruddy had established a part time business, the Triple Cities Coin Exchange. Rare coins were fascinating to the general public back then, as they are now, and every once in awhile something would make the news. So it happened in 1955, when a few local people noticed that certain Lincoln “pennies” they were finding in circulation were blurred or doubled, very curious. Jim was shown an example and became quite excited, recognizing its true numismatic significance. Word spread, possibly including on the local radio that Triple Cities Coin Exchange would pay 25¢ each for all of these oddities. While today that sounds like a tiny sum, probably in terms of inflation it would be like paying $3 to $5 for a newly discovered curiosity now. Besides, at the time there was absolutely no numismatic resale demand, as no one knew of the variety. Beyond that, even if there were demand, it might have been only among collectors of “freaks,” this being the standard term for oddities, and used regularly in the pages of the Numismatic Scrapbook Magazine and others.

All of the cents brought to Jim Ruddy were bright orange, as nice as when minted, some had fingerprints applied by the finders, but they still were quite nice. Upon questioning he found that all or nearly all had been found by users of cigarettes. At the time a pack of cigarettes sold in the vending machine was priced at 23 cents retail. Upon dropping a quarter in the slot of such a machine, a pack would be dispensed, with two bright Lincoln cents packaged under the cellophane as a refund. Where the cents were actually package, in the Triple Cities area or somewhere else, was not investigated at the time and probably could not be learned now.

Within a week or two or three Jim had accumulated several dozen such pieces and didn’t know what to do with them! So, he called off his buying campaign, no more were wanted! Of course, this seems improbable now, but that was precisely what happened back then.
In time, word of this curious 1955 Lincoln cent spread. News items were carried in The Numismatic Scrapbook Magazine and in Numismatic News. A popular nickname for it was the 1955 “shift cent.” A small demand arose, then a larger one, followed by spreading news and still more demand. By 1958-1959 there was a brisk trade in them. In time, the variety became listed in A Guide Book of United States Coins, with Kenneth E. Bressett probably assigning the name Doubled Die, which stuck, and which is used today. Today, of course, the 1955 Doubled Die cent is a legend. In case you were thinking how many I have the answer is perhaps unfortunate for me: I didn’t keep any! However, I have a lot of nice memories.