History and Information about the 1793 Chain Cent 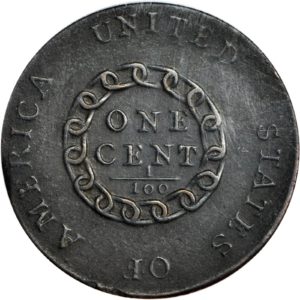 The historical keystone in any American cent collection, the Chain AMERI. cent of 1793 represents a sea change in American monetary history. It was the first large scale production of the United States Mint in any metal. While 1792 half dismes are now generally thought to have been struck for circulation rather than serving exclusively as patterns, their initial mintage was a paltry 1,500 pieces, all coined outside the Mint. Some evidence suggests another, smaller production run was coined inside the Mint later in 1792, but even the most aggressive mintage estimate for the half dismes is dwarfed by that of the Chain cent. More than 36,000 Chain cents were coined, of which Breen suggests about 6,350 were this variety, though pinpointing mintage figures for individual die marriages based upon delivery data and survivorship estimates is tricky at best and utter guesswork at worst.

The Chain design was first struck at the Philadelphia Mint in late February 1793. By April of that year, the design had been changed entirely, yielding to a more elegant depiction of Liberty on the obverse and a wreath on the reverse. The reason for this quick change is not known, but complaints like this that appeared in Philadelphia newspapers in late March could not have helped.

“The American cents (says a letter from Newark) do not answer our expectation. The chain on the reverse is but a bad omen for liberty, and liberty herself appears to be in a fright – May she not justly cry out in the worlds of the Apostle, ‘Alexander the copper smith hath done me much harm, the Lord reward him according to his works’”

Blame was laid at the feet of “Alexander the coppersmith,” a reference to Secretary of the Treasury Alexander Hamilton. Hamilton was not a man who handled criticism particularly well, especially when the appropriate target of the criticism was an institution overseen by his rival at the State Department, Thomas Jefferson.

Modern scholars don’t know who first found a Chain AMERI. and determined that it was a distinct variety from other Chain cents, but we do know collectors have placed a high value on the first American cents for a very long time. The first auction appearance of a Chain cent known to modern numismatists occurred at the 1851 Lewis Roper sale, where collector Ammi Brown took home an Uncirculated Chain cent of an unknown variety for a dime; it was described in the most basic of terms, “Cent, 1793.” In 1869, Brown bragged about his purchase in the pages of American Journal of Numismatics and confirmed that it was a Chain cent: “It was as fine as when struck, and probably had never been circulated. At that time but little interest was felt in American coinage, and this piece was knocked down to me for my first bid of ten cents.”

The AMERI. variety was seemingly recognized by 1855, when John W. Kline’s sale of June 12-13 offered, as lot 73, “Cent, 1793 different dies, p[ieces]. 4.” The lot hammered for 80 cents. We can speculate that the four varieties were the four principal types recognized by modern collectors: the Chain AMERI, the Chain AMERICA, the Wreath, and the Liberty Cap. Numismatic historian Joel J. Orosz, who has written extensively about numismatic auctions in the 1850s, suggests that lot 173 of the Pierre (sometimes anglicized as “Peter”) Flandin sale of June 6, 1855, represents the first published reference to a Chain cent. The lot was described as “Two 1793 cents, one with 15 links of a chain; and a cent of 1795, equal to a proof, very rare 3 pieces.” The first definitive reference yet located to a Chain AMERI. appeared in the Boston Transcript newspaper on March 1, 1859. Signed “A.S.,” initials of the well-known collector Dr. Augustine Shurtleff, the two-column article was entitled “About Cents.” It described 11 different die varieties of 1793 cents, along with bon mots about other dates in the series. Shurtleff’s first variety was described as:

“Obverse, a head with fine flowing hair, copied from the French ideal of Liberty; beneath, the date, with figures wide apart; above, the word ‘Liberty.’ Reverse, an endless chain of fifteen links, enclosing the words ‘one cent’ and the fraction 1-100. Around it ‘United States of Ameri.’ Edge divided into alternate sections of leaf work and milling.”

When Sylvester Crosby described the varieties of 1793 cents in 1897, assigning numbers that would remain in use until well after Dr. Sheldon penned Early American Cents, his description would not be significantly different. Between Shurtleff and Crosby, cent collecting would remain the focus of all American numismatics, and the Chain AMERI. would become the most famous and important variety of all American cents.