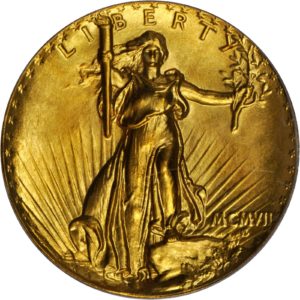 For many readers the large, heavy and beautiful $20 gold pieces of the 20th century are the ultimate collectible. This article gives an overview of the series and also introduces some previously unpublished information regarding the quantities of certain issues officially released into circulation.

Created by Augustus Saint-Gaudens, America’s most famous sculptor, the first of the new 20th-century designs were first issued in late 1907, the initial production being some of what eventually totaled 12,367 of the MCMVII High Relief design, quickly followed by the much more plentiful “Arabic numeral” 1907 issues, then other dates and mintmarks through 1916. By time of the latter year the World War was in progress in Europe, and gold coins were hoarded. Soon, in the United States they were no longer being paid out at par by banks. Production stopped, and it was thought that the standard value of $20.67 per ounce for basic gold would rise and stay there. However, despite a flurry of investment activity, by 1920 normal conditions resumed, as did the production of $20 pieces.

The early issues of the Saint-Gaudens series from 1907 to 1916 can be studied on their own. These make an interesting specialty to collect today, with no “impossible” rarities, although some, such as 1908-S and 1913-S are scarce. The famous MCMVII, although of low mintage, was saved in quantity, and I estimate that somewhat over 6,000 exist today, the majority being in various levels of Mint State, usually toward the lower end. The demand for the MCMVII is strong and everlasting, extending far beyond numismatists who collect gold coins by type or date sequence. A number of surveys have pinpointed this as the most beautiful of all circulating coin designs, creating a demand by those who simply want a trophy piece, never mind that this might be the only gold coin in their collection.

Remarkably, nearly all of the other issues from 1907 through 1916 can be collected in Mint State for less than $1,000 each. Choice and gem Mint State can be another situation entirely, and several different varieties, readily enough available in, say, MS-63, become very elusive in MS-65 or MS-66. Perhaps the most notable collection of high-grade pieces was that of Dr. Thaine Price, catalogued and auctioned by David W. Akers a few years ago. Dr. Price, a connoisseur with appropriate money to spend and with the realization that years would be needed to build a fine collection, set about a quest for superb quality. When sold, it was revealed that nearly everything he owned was a gem.

Among the earlier issues, the 1909/8 overdate is of special interest, being the only such overdate in the Saint-Gaudens series. Examples are readily enough available in grades from AU through low Mint State, but gems are elusive.

During this era $20 gold coins were seldom seen in general circulation in the East and Midwest. Banks typically had some of them set aside in their vaults, but these coins were not usual in everyday transactions. The situation was a bit different in the Rocky Mountain states and on the West Coast, and until 1917 double eagles circulated widely and were seen with some frequency.

After the 1917-1919 hiatus in double eagle coinage, production resumed in 1920, as noted. After that time gold coins were not used in commerce in the mountain states or on the West Coast. Thus ended the general period of normal use as a medium exchange.

Mintage of the $20 coins continued, often in large quantities, for each year of the decade. However, as these were not used to any extent in circulation, two things happened to those coins:

(1) Many were simply stored in Treasury Department vaults, in cloth bags. In the 1930s these were melted.

(2) Others were shipped overseas, as American paper dollars had little respect among foreign governments or merchants who wanted to maintain value. During the 1920s post-war Germany was distressed by rampant currency inflation, whereby thousands or even millions of marks and paper money had virtually no value in terms of buying a loaf of bread. While many varieties of American paper dollars were redeemable in silver or gold, and so stated, foreign treasuries did not want packs of such bills in their vaults. Instead, they wanted double eagles, each one of which was worth about $20 in real gold if melted down. Many of these were repatriated after World War II and form the main source of the supply in the market today.

Mintage of double eagles continued after the 1920s, and included the issues of 1930-S, 1931, 1931-D, 1932, and 1933. As to whether the coins of the last date ever were officially released, such as to numismatists who applied for them, is a matter of conjecture to this day. It is known that no wholesale release occurred to banks. However, the Secretary of the Treasury in March and April 1933 was none other than William H. Woodin, one of America’s foremost students of gold coins. Likely, anyone asking for a $20 piece could have obtained one at face value. Later, release was prohibited, and the whole matter went underground. The 1933 scenario, or at least one version of it, is entertainingly treated by David E. Tripp in his 2004 book for the mass market, Illegal Tender: Gold, Greed, and the Mystery of the Lost 1933 Double Eagle.

Double eagles minted from 1907 through 1916 were released into circulation as well as sent to foreign destinations. No significant quantities have been recorded as hoarded by the Treasury Department, although among the larger mintage issues it is likely that some were. Today, these are easy enough to collect. Most are inexpensive in comparison to their bullion value and their general scarcity.

The double eagles minted from 1920 through 1929 offer somewhat of a puzzlement from a numismatic viewpoint. It seems that a few scattered issues were sent to domestic banks, mostly to be kept in vaults, as the pieces did not circulate. These probably included the Philadelphia issues from 1922 through 1928, plus a few others. Bulk quantities of certain others were sent overseas, the knowledge of this being gained by the fact that after World War II large quantities were found there, these including most Philadelphia Mint coins of 1920 and 1922 through 1928. Vast quantities were exported of 1924-1928 in particular, making them exceedingly plentiful today. For a long time it was generally assumed that most others were stored by the Treasury Department and melted circa 1937, a few years after gold coins had been called in (following actions by President Franklin D. Roosevelt in 1933 and 1934).

Because of differences in distribution, double eagles of the 1920s vary widely in their availability today. Those that were sent overseas in bulk are easily collectible today, as many have been repatriated. Issues that were stored in Treasury vaults and later melted, or that were sent overseas in only small quantities, are scarce or rare today. In the category of key issues the 1920-S, 1921, 1927-D (in particular), 1930-S, and a few others are notable.

Thanks to Mint Employees

In 1937 the government decided to melt tons of long-stored double eagles and other gold coins. At the Philadelphia Mint alone there were hundreds of bags of $20 coins that had never been paid out, including such dates as 1929, 1931, and 1932, as well as pieces of various denominations that had been naively surrendered by the general public (soon after citizens turned in their $20 gold coins, Roosevelt raised the market price of gold from $20.67 per ounce to $35—clever move, some would say).

Abe Kosoff, who was an active dealer in New York City in the 1930s and early 1940s, related to me that quite a few Mint, Treasury, and bank employees saved coins that had been surrendered by the public, and sold them at a profit to dealers in New York and Philadelphia. This included Philadelphia Mint personnel who rescued the aforementioned 1929, 1931, and 1932 coins from oblivion, not to overlook 10 or so specimens of the 1933 that, somehow, found their way out of the Mint.

Today, numismatists can be very thankful for these people who made it possible for otherwise rare double eagles to be preserved for numismatic posterity. Similarly, but with a different slant, we can be grateful for the Mint officers who in the 19th century made thousands of patterns, restrikes, and other items for their private profit, with little in the way of records being kept, creating a panorama of coins that furnish much collecting enjoyment today.

As to whether employees of the Philadelphia Mint who secretly made patterns generations ago, or later employees who saved rare $20 coins from the melting pot, were “good” or “bad” is probably moot today. Perhaps we can consider them to be rascally outlaws, but as no one was hurt, and as numismatists have benefited, I like to think that their deeds were ultimately very desirable. I’m delighted that they did all of this. Perhaps similarly, the “Indians” who staged the Boston Tea Party in the early 1770s and dumped cargo into the sea were doing something that was not legal at the time, but we all benefited from the end result—American independence.