The Shilling – A Numismatic Centerpiece 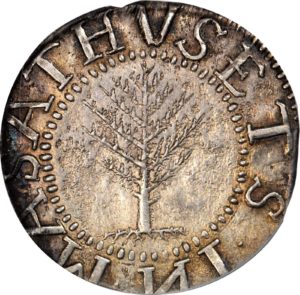 The Pine Tree shillling is fascinating to contemplate in any grade—from well worn, as usually found, to challenging Mint State.

In The Numismatist, November 1909, Howland Wood gave the following advice under the title of “Numismatic Maxims for Beginners.” Just one coin variety was specifically mentioned: His advice, by the way, is still relevant today:

Don’t set your heart on acquiring any shilling coin right off. If you force the market you generally have to pay more than it is worth.

If you are a young man you can afford to wait; it is only the old men who cannot.

Don’t plunge in too quickly at the start and think you must buy every coin offered.

Don’t try to collect everything; you’ll never catch up with your contract. Also you will not enjoy what you have.

You’ve got to learn by experience; a few jolts and knocks will impress you more than all of the advice an older collector can give you.

Don’t take any man’s word that a coin is unique. There are far fewer unique coins than there are said to be.

A library goes hand in hand with the collection of coins.

It is better to collect a few series and know your subject than to attempt to collect everything and think you know it all but really know nothing.

Every collector should have a Pine Tree shilling, as that is the first question your guests ask if you have.

Never cry down another collector’s coin; give them, at least, the benefit of the doubt.

Never talk scandal or say mean things about other collectors; if you have nothing good to say, say nothing.

The last maxim is the most important one to remember, and it is the one most often transgressed.

While today the 1652-dated silver Pine Tree shillings of Massachusetts are scarce in relation to the demand for them and are apt to be encountered just one at a time, and not all that often, this was not always the case. Shortly after the turn of the 20th century, Augustus G. Heaton visited W.S. Lincoln & Son, rare coin dealers in England, later informing readers of the July 1905 issue of The Numismatist:

In London…Lincoln has a small store on a central, though less fashionable street, but it is entirely devoted to coins and curios, which he mainly attends to unaided, and collectors have every attention. I was shown an entire tray full of Pine Tree shillings and sixpences—a very choice array, and a number of drawers of U.S. coins of all denominations with, here and there, very tempting pieces.

Nearly a half century later, in 1956, Louis E. Eliasberg, Sr., who formed the only complete collection of United States coin denominations, dates, and mintmarks ever assembled, prepared a booklet, “An Exhibition of the World’s Foremost Collection of United States Coins.” Among the highlights illustrated was a very attractive example of the Pine Tree Shilling dated 1652, variety Noe-1(pictured at the beginning of this chapter). This commentary was included:

The first mint in the colonies was operated by John Hull without royal license. The General Court of Massachusetts Colony, in an order dated May 27, 1652, authorized the coinage of shillings, sixpence, and threepence, and fixed Hull’s fee at one shilling out of every 20 coined. The mint was located in the rear of Hull’s residence in Boston, and operations began in the same year.

Story of the Pine Tree Shilling

In the mid-seventeenth century in the Massachusetts Bay Colony monetary conditions were chaotic. There was an insufficiency of circulating coins, and the pieces that could be found were often lightweight or counterfeit. Spanish-American silver and gold coins were used in large transactions, especially in the seagoing trade, but these were not in abundant supply and all too often were of questionable weight and authenticity as well. Wampum, corn, grain, fish, musket balls, and other items also served as media of exchange, particularly for business within the colony.

In May 1652 the General Court of the Massachusetts Bay Colony authorized John Hull and his friend Robert Sanderson (born Saunderson in England) to produce silver threepence (denominated III), sixpence (VI), and shillings (XII), such to be marked NE (for New England) on one side and with the denomination on the other. These were made on crude silver planchets, counterstamped twice, once with NE, after which the planchet was turned over, and at the opposite end, in order to avoid flattening the NE inscription, the III, VI, or XII was stamped. A “privy mark” or secret notation was to be applied to each coin, to be changed every three months and to be known only by the governor and by sworn employees of the mint. Such a mark was intended to be useful in determining whether a given coin was genuine if it was later questioned. It was first proposed that each coin be “flat and square,” but it was subsequently decided to make them “in a round form.”

The mint building to be erected on Hull’s property in Boston was to be 16 feet square by 10 feet high. Hull and Sanderson were to receive as their compensation one shilling for every 20 coined, a contract which eventually yielded to Hull what was described as a fortune. Little has been written about Sanderson’s activities, but, presumably, he benefited extensively as well. Dies were cut by Joseph Jenks (or Jencks) and probably others, Jenks having a manufactory at Saugus Iron Works near Boston (today a historic site open to the public). Silver sources were erratic, were never ample, and included coins and metal from the West Indies, some of the latter being in the form of silver captured by buccaneers from Spanish galleons.

The production of the NE coinage (as it became known later in numismatic circles) was brief and apparently extended from about June 11, 1652 to about October 19, but bore no date. The simple design of the NE pieces invited clipping (the removal of silver slivers from the edge) and counterfeiting. On October 19, 1652, the General Court authorized a revision of the motifs to incorporate a tree design on one side and the date 1652 and denomination on the other, each side to have border inscriptions as well.

The first tree-type coins depicted what seemed to be more like a bush or thicket, subsequently called the Willow Tree coinage by numismatists. The Willow Tree pieces were crudely struck from amateurishly prepared dies, leading Crosby to suggest that, “So rude, indeed are they, that it is difficult for us to believe them to have been accepted by any people except under urgent necessity for coin of some kind, however imperfect.” These were followed circa 1660-1667 by the so-called Oak Tree coinage which included a new denomination, the twopence, used only in the Oak Tree series, bearing the date 1662 (while other denominations continued the anachronistic 1652 date).

The Pine Tree coinage was made next, from 1667 to 1674 in the large-diameter format (this being the format of the illustrated Noe-1 variety from the Eliasberg Collection), and after that, until 1682, on thicker planchets of reduced diameter, the latter reducing die wear. Hull’s contract to coin silver for the colony was renewed four times by the General Court, the last on May 12, 1675, for a period of seven years. In 1682 the franchise expired, and there was no consideration to renew it. Mintmaster Hull died the following year on October 1, 1683.

Numismatic tradition has it that for many years the Massachusetts silver coinage had been considered illegal by British authorities, probably giving rise to the continuance of the 1652 date (except for the 1662 Oak Tree twopence) to preserve the fiction that coinage had not occurred after that time. Relations with the British crown were not cordial, and in 1684 the colony’s charter was revoked for what was considered to be many years of disobedience. Alternatively, the 1652 date simply represents the year of initial authorization of the various issues.

The Massachusetts coins circulated widely in the Eastern Seaboard colonies and in Canada. There were sufficient pieces in commerce in Maryland that on November 19, 1686, that colony legislated that silver sixpence and shillings from New England should pass as equivalent to British coins of the same denominations. Threepence pieces, never made in large quantities, did not become important in commerce.

The affairs of the Massachusetts Bay Colony are well documented in papers and accounts readily available to researchers, and the coinage was sufficiently extensive that dozens of die varieties have been identified, some common, others extremely rare.1 As a result, the silver coinage has attracted the attention of several American students over the years, beginning in a significant way with Sylvester S. Crosby in the 1870s, continuing to Sydney P. Noe in the 1940s and early 1950s and others since that time.

The Pine Tree shilling in particular became the subject of several stories and folklore accounts, including a romantic tale penned by Nathaniel Hawthorne in which John Hull, the mintmaster, gave his daughter’s weight in Pine Tree shillings as her dowry, this being repeated by Benson J. Lossing and many others. Another story has it that such pieces, if bent twice, would ward off witches, said to be prominent in Salem in the late seventeenth century.

By the early nineteenth century, long before numismatics became a widespread hobby in America, Pine Tree shillings and related issues were recognized as interesting items to collect and were sold for premiums in various auctions and offerings of antiquities. Many accounts were published of stray pieces being found here and there, as in this item in Historical Magazine, July 1867:

An old “pine tree shilling” of Massachusetts coinage, of the very old and rare date, 1652, was picked up a day or two ago by Orrin Loomis, of West Springfield [Massachusetts], an old man of 75, while walking in his own fields. The letters upon the coin, the figure of the old tree, date and all, have been distinctly preserved.

Crosby in Early Coins of America, 1875, reprints much valuable and interesting original legislation and commentary. Noe’s three works on the series, published in 1943 (NE and Willow Tree coinage study), 1947 (Oak Tree coinage), and 1952 (Pine Tree coinage), form the source for “Noe numbers” used to attribute the coins today. Noe further gave much fascinating information about hoards of Massachusetts coins found over a long period of time.

Not much is known about the specific equipment used to strike the coins. It is believed that the earliest NE pieces were made by impressing the NE logotype punch on one part of the planchet, then turning the planchet over and hitting it with a denomination punch (e.g., XII) in a spot not directly opposite the first stamp, so as not to obliterate it. Such a procedure seems evident from examination of the coins themselves. The Willow Tree pieces were probably made by using two opposing metal dies in some sort of a chuck or sleeve, but not tightly fastened—as many show doubled impressions and other evidence of the dies being loose, and slightly differently aligned when a second blow was given to help strengthen the impressions. The slightly undulating or “wavy” appearance of certain pieces such as large planchet shillings may indicate that some type of a rocker die was used. Certain theories regarding the coinages have been related in The Colonial Newsletter and elsewhere.