The History of the 1794 Silver Dollar 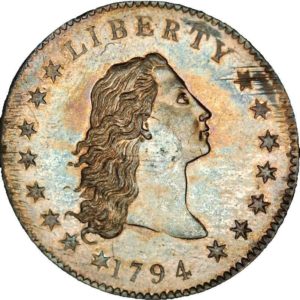 Ever since the cradle days of numismatics in America in the 1850s, the silver dollar dated 1794 has been an object of admiration, interest, and possession desire. While there were scarce varieties among other dates through 1803, it was the 1794 that attracted the most attention. In the first major book published for collectors, The American Numismatical Manual, 1859, Dr. Montroville W. Dickeson sagely observed: “This coin has become exceedingly rare, and fair specimens command a handsome premium.” Dickeson’s work was exceedingly impressive for its time, and nothing even remotely comparable to its content and format appeared for the rest of the nineteenth century.

During the mid-nineteenth century, sharp-eyed bullion brokers, bank tellers, and others kept a weather eye out for the silver dollar of this date. Over a period of time perhaps 100 or so were found in circulation. To these can be added an estimated 25 to 35 others acquired by numismatists before 1850, primarily by English collectors who sought “crown”-size coins from that late British possession now called the United States. This had fortunate consequences in later decades when England became a rich source for early American coins, and such dealers as E.L. Mason, Jr., S. Hudson Chapman, H.G. Sampson, and Édouard Frossard went on buying trips there. This mother lode of early American coinage continued to be mined through the twentieth century, and significant finds sometimes still occur in our own era, although important new discoveries are few and far between (two notable exceptions being a pair of Mint State 1794 dollars auctioned under the title of the Lord St. Oswald Collection by Christie’s in London in 1964).

The dies for the 1794 dollar are almost certainly the work of Robert Scot, a medalist and die sinker. He had begun his career in England as a watchmaker, and had come to America, where he engaged in engraving plates for money and bills of exchange during the Revolutionary War, scales used in the office of financier Robert Morris, and plates illustrating architectural items for Dobson’s Encyclopedia, among numerous other commissions. In 1780 he produced the dies or molds for an Indian peace medal, “Happy When United,” for the state of Virginia. In 1781 Robert Scot’s workshop was located in Philadelphia on the west side of Front Street, near the corner of Vine.

Following the death from yellow fever in the summer of 1793 of Joseph Wright, a talented artist of whom many fine things were expected, the Mint sought to add a full-time engraver to the staff. Wright had worked on and off for the Mint, and today is credited with designing the 1792 eagle-on-globe patterns and the 1793 Liberty Cap cent, both beautiful works of art.

On November 23, 1793, Secretary of State Thomas Jefferson, who was in charge of the affairs of the Mint, wrote to Robert Scot and sent him a commission to be engraver at the Mint. To Scot fell the task of cutting the dies for coinage, including the 1794 Flowing Hair dollar. In November 1794, John Smith Gardner was hired as his assistant, but by this time the initial delivery of silver dollars had been accomplished. Probably, Gardner worked on some of the 1795 and later dies.

In 1793 and 1794, the largest press at the Mint was intended for striking no coins larger than a half dollar. Surviving documents indicate that Mint officials lamented the lack of a press suitable for coining silver dollars and medals. It was not until spring 1795 that one was installed.

In the meantime, a screw press suitable for coining cents and half dollars was put into service to make silver dollars. The initial coinage of the new denomination was accomplished in the first part of October 1794. The effort was not completely successful, as evidenced by surviving coins which show areas of weak striking. Apparently, just one blow of the press was used (as evidenced by the lack of double struck features on surviving pieces).

Known silver dollars dated 1794 are from a single pair of dies and are believed to have been made to the extent of, perhaps, 2,000 coins (Walter H. Breen’s estimate), of which 1,758 pieces considered to be satisfactory were delivered by the coiner on October 15, 1794. The remaining impressions, possibly amounting to 242 coins, rejected as being too weak, probably were kept on hand for later use as planchets. Supporting this theory is the existence of at least two 1795 silver dollars each plainly overstruck on a 1794 dollar.

The silver for striking these came from ingot deposits made by Mint Director David Rittenhouse and Charles Gilchrist. This is certain, because Rittenhouse personally received all the first coinage of dollars.

The obverse and reverse die faces were not parallel, with the result that on almost all pieces surviving today the lower left obverse side appears weaker than the upper right obverse side, with corresponding weakness and strength on the opposite areas of the reverse. As the die faces remained out of parallel after having been removed from the press for resurfacing and removal of clash marks, and re-inserted in the press, the cause of the maladjustment must have been that the face of one die (or, less likely, both dies) was not perpendicular to its shank.

After the effort at coining dollars, the project was abandoned as a bad job, and a large supply of silver dollar planchets was put into chests for storage until a larger, satisfactory press could be installed. Thus, the mintage of 1794 dollars was much smaller than had been intended.

Often in the affairs of men and the Mint, one situation can have profound effects upon another. As it was not feasible to coin an additional quantity of silver dollars until a new press was on hand, the mantle of the largest silver coin fell upon the half dollar, and in early 1795 large numbers were struck in a proliferation of die combinations (thus providing an especially rich field for numismatic study today). After a new press was on hand, half dollar production fell off sharply (with only a few coined in 1796-7 and none at all from 1798 to 1800), while silver dollar production reached new high levels.

Reception of the 1794 Dollars

So far as is known, the new 1794 silver dollars slipped into circulation and immediately began doing their duty in the channels of commerce. Despite all good intentions, when the first 1794-dated United States silver dollars reached merchants and bankers, and when their successors dated 1795, 1796, etc., did also, the Spanish-American dollars, or eight-reales pieces, were preferred over the native American product.

The old eight-reales coins were worth slightly more on the market than were the sparkling new United States coins with the head of Miss Liberty on one side and an eagle on the other. The reason is that the citizenry was familiar with the eight-reales coins, and especially in the export trade they were welcomed worldwide. Although the new United States dollars might test properly by weight or analysis, most business was done at sight, and the new coins had yet to prove their status. The record shows, for example, that typical trading vessels out of Salem and other East Coast ports were laden with thousands of Spanish-American dollars, but so far the writer has encountered no specific mention of United States dollars being used in the general era 1794-1804.

By early December 1794, a few of the newly minted United States dollars had traveled north to the Granite State, where the New Hampshire Gazette reported the following on December 2nd:

Some of the dollars now coining at the Mint of the United States have found their way to this town. A correspondent put one into the editor’s hands yesterday. Its weight is equal to that of a Spanish dollar, encircled by Fifteen Stars, and has the word ‘LIBERTY’ at the top, and the date, 1794, at the bottom.

On the reverse, is the Bald Eagle, enclosed in an Olive Branch, round which are the words “One Dollar, or Unit, Hundred Cents.” The tout ensemble has a pleasing effect to a connoisseur; but the touches of the graver are too delicate, and there is a want of that boldness of execution which is necessary to durability and currency.

We have it on the word of an unnamed editor of a New Hampshire newspaper that the new 1794 United States silver dollar had “a pleasing effect to a connoisseur.” What more could be asked for?