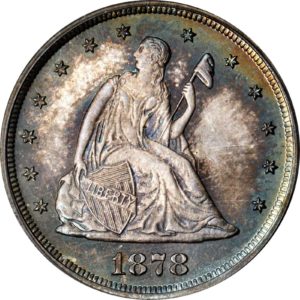 Produced only from 1875 to 1878, and for circulation only in one truly significant year, 1875, the 20-cent piece is the most short-lived of all American coin denominations.

The scenario in 1874 was centered on the West Coast. Small-denomination minor coins, including Indian cents, two-cent pieces, nickel three-cent pieces, and Shield nickel five-cent pieces, had never circulated there to any extent, nor was the silver three-cent piece used in commerce. For this reason, the San Francisco Mint produced none of these denominations. Half dimes were made in San Francisco from 1863 through 1873, when these silver coins were abolished, and most pieces quickly disappeared from circulation, thereby causing a problem:

In 1874 the smallest denomination regularly seen in circulation was the dime or 10¢ piece. If someone wanted to buy an item priced at 10¢ and did not have a dime, and offered 25¢ in payment, he received a Spanish-American silver one-real “bit” (worth 121/2¢) in change. Such coins, once plentiful, had disappeared from circulation in the East, but many were still used in the West. If a 121/2¢ piece was not available, then a merchant was apt to give a dime, facetiously called a “short bit,” as change for a 10¢ purchase. As stated, half dimes were not often seen and thus could not be used readily.

By rather complicated reasoning, if the 20-cent piece became a reality, someone could make a 5¢ purchase, tender a 25¢ piece in payment, and receive a 20¢ piece as change. Or, for a 10¢ purchase a 20¢ piece could be offered, and change of 10¢ would be given.

Perhaps a simpler explanation is that which appeared in the American Journal of Numismatics, July 1875, to the effect that the 20¢ pieces were made to replace Spanish silver coins that still circulated in the West and Southwest.

In February 1874 Senator John P. Jones of Nevada introduced a bill for the 20¢ piece. At the time Nevada was America’s leading silver-producing state. While fortunes from the Comstock Lode in Virginia City, Nevada, had been at a high crest in the 1860s and had prompted the establishment of the Carson City Mint a few miles away from Virginia City, by the 1870s the price of the metal had fallen, and times were difficult. New markets were needed. Certainly, a new silver denomination such as the 20¢ piece would help. Jones in his proposal suggested that the 20¢ piece would facilitate change-making and help eliminate the use of Spanish-American coins.

On March 3, 1875 the 20¢ piece became legal. Patterns had been prepared beginning in 1874, a final design had been selected, and coinage began in earnest.

The obverse featured Christian Gobrecht’s motif of Miss Liberty in a seated position, stars surrounding, and the date below.

The reverse displayed a motif by William Barber and depicted a perched eagle, somewhat similar in configuration to that used on the trade dollar, surrounded by UNITED STATES OF AMERICA and the denomination expressed as TWENTY CENTS.

The edge is plain, unlike other silver denominations of the era (which had reeded edges).

At the time there were no silver coins of any kind in circulation in the Midwest and East as specie (gold and silver coin) payments had been suspended by the Treasury Department in 1862, during the Civil War when citizens were hoarding coins, and payments had not yet resumed. Thus, mintage of the new silver 20¢ pieces was concentrated in the Western states, as per these circulation strike mintage figures:

The Philadelphia Mint coins were not placed into circulation at the time, but the Carson City and San Francisco pieces were.

It was soon realized that just because a coin of this denomination was available, merchants did not necessarily change their habits, and the piece was a failure virtually at its inception. They were immediately confused with quarter dollars of somewhat similar size and design.

Shortly thereafter, the denomination became an object of confusion and derision, and circulation strike coinage declined precipitously. The next year the production figures were as follows:

After that time, coinage of the 20¢ piece was limited to several hundred Proofs each year for collectors, 1877 and 1878, after which the denomination was no more.

In 1878, Senator John Sherman testified before a House committee about the 20¢ piece and said that it had been created “only because Senator Jones asked for it.”

Dr. Henry R. Linderman in his book, Money and Legal Tender, said it was a mistake to introduce the piece, but that it was a proper denomination between a dime and a half dollar and should have been used instead of a quarter dollar. It will be recalled that there is no $25 bill.

A Rarity is Created

Per the earlier quoted figure, 10,000 1876-CC 20-cent pieces were struck. However, by the time they were produced by the Carson City Mint, the denomination was rendered effectively obsolete, so apparently nearly all were melted. The destruction of these coins is probably the subject of the following request written by Mint Director Henry Richard Linderman on May 19, 1877, addressed to James Crawford, superintendent of the Carson City Mint:

“You are hereby authorized and directed to melt all 20-cent pieces you have on hand, and you will debit ‘Silver Profit Fund’ with any loss thereon.”

Thus, a rarity was created!

In 1876 at the Carson City Mint, selected samples of all coins were set aside for examination by the annual Assay Commission, which met in Philadelphia on Wednesday, February 14, 1877. Presumably, only a few 1876-CC 20¢ pieces were shipped east for the Commission. This group later probably constituted most of the supply available to numismatists. It seems likely that a few were paid out in Nevada in 1876-1877, accounting for a handful of worn and impaired pieces known today.

Perhaps the first specimen of the 1876-CC 20¢ piece to attract notice in a catalogue was that sold in the R. Coulton Davis Collection sale by New York Coin & Stamp Company, January 20-24, 1890. At that time only a few numismatists collected coins by mintmark varieties, and virtually nothing was known of the 1876-CC.

The rarity and desirability of the 1876-CC 20-cent piece was first showcased to a wide audience in an interesting monograph, A Treatise on the Coinage of United States Branch Mints, by Augustus G. Heaton, published in 1893. Prior to that time, numismatists had been concerned primarily with dates, and whether a coin had a mintmark or not made little difference. Heaton, a facile writer, listed 17 “causes of attractiveness” for collecting mintmarks.

Heaton mentioned the 1876-CC 20-cent piece in two places, noting in the preface that it was “excessively rare in any condition,” and in the main text the following: “The pieces of 1876-CC have become very rare, as we have mentioned in our preface, from the negligence of western collectors, or the indifference involved in mintmark rarities.”

The June 1894 issue of The Numismatist included two interesting fillers, possibly related, but who knows?:

Among advanced collectors of mintmarks are Edward Goldschmidt, of New York, William M. Friesner, of Los Angeles, and George W. Rice, of Detroit.

Three of the rare 20-cent pieces of 1876 from the Carson City Mint have lately turned up in Uncirculated condition. It was not two days before they were incorporated into three of our leading collections where their presence is highly appreciated.

In due course other examples of the rare 1876-CC 20¢ piece attracted notice including in the Dr. S.L. Lee Collection auctioned by J.W. Scott & Co. on June 12, 1899. The Lee cabinet was a particularly fine one, and many other delicacies were included. The buyer of the 1876-CC 20¢ piece was well-known numismatist John M. Clapp (this specimen later went to Louis E. Eliasberg, Sr.).

Another 1876-CC was offered by Édouard Frossard in the J.G. Hubbard Collection sale on December 10, 1900, and was purchased by S. Benton Emery (whose collection was sold by Bowers and Merena Galleries, November 1984, this coin appearing as Lot 492). From such beginnings in the late nineteenth century the 1876-CC became highly prized, and it has been a mark of distinction if a major cabinet includes an example.

Mention of the Clapp-Eliasberg specimen was made by Edgar H. Adams in The Numismatist, March 1911, in his column, “Live American Numismatic Items”:

Mr. Elmer S. Sears is exhibiting one of the greatest prizes of the mint mark field—an Uncirculated specimen of the extremely rare 20-cent piece of 1876, of the Carson City Mint.

This piece is remarkable for the fact that although ten thousand are said to have been struck at the Nevada mint in that year, still not more than four pieces can now be located. One of these is owned by Mr. John H. Clapp of Washington, another by Mr. Virgil M. Brand of Chicago, and the third by Mr. H.O. Granberg of Oshkosh, Wis.

The Adams account brings together several of the most famous names in numismatics at the time. Elmer S. Sears was for several years a partner with Wayte Raymond in the U.S. Coin Company. Virgil M. Brand (1861-1926), wealthy Chicago brewer, devoted most of his life to coins and assembled a magnificent holding. Granberg had one of the finest cabinets of his era within which were the 1804 dollar and the 1884 and 1885 trade dollars among other delicacies.

As the years progressed and interest in mintmarks became more intense, the field was studied carefully. Today the population of extant 1876-CC 20¢ pieces is believed to be about 20 pieces.

In the late 1950s, Baltimore dealer Tom Warfield found a group of seven, eight, or possibly nine splendid Mint State coins in his home town. Each piece was a lustrous gem, delicately toned, and virtual perfection. It is my opinion that these may have come from someone who once served on the Assay Commission which in 1877 reviewed the prior year’s coinage.

The genesis of this cache was never revealed, but was variously thought by others to have been T. Harrison Garrett (who died in 1888, had a fabulous collection, but did not seem to have acquired many mintmarked issues; in my opinion, he can be eliminated as a possibility, especially as his estate did not contain even a single specimen of the 1876-CC 20¢), Waldo C. Newcomer, or Frank G. Duffield. Even the name of Louis E. Eliasberg, Sr., was mentioned. Four of these coins were sold to the writer, who subsequently distributed them into as many different collections. Several more were sold to John J. Ford, Jr., of New Netherlands Coin Company.