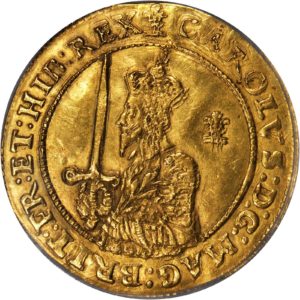 Throughout history and in every corner of the globe, people have used some form of exchange with an inherent or agreed-upon value to form systems of trade and economic structure. Everything from humble carved stones to large pieces of precious metal emblazoned with works of great artistry has been used. The study and collecting of these objects makes up the field of world numismatics. However, numismatics is not just about a coin as a physical object but also encompasses all of the fascinating things coins can tell about the people who used them and the world in which they were used. Coins tell us how people bought their daily bread, how soldiers were paid, what government they lived under and served, and what they held most sacred. Coins tell us what victories had been recently achieved, how long monarchs reigned and show the decline of kingdoms and empires. Even the manner by which they were produced portrays the onward march of technology and an ever-increasing level of sophistication. It is these insights into history that drive the interest and passion of the coin collector. Numismatics has been the hobby of kings and the profession of laymen. With the entire world as a field of study there is a multitude of niches and facets in which to immerse yourself. While the vast panorama of world coins may seem daunting at first, there are major themes seen on coinage and simple methods of determining the origin of world coins.

Coins of Europe are frequently encountered due to a centuries-long production span and worldwide spread through colonialism and international trade. Coin collecting has been a pastime in Europe since the Renaissance and as such thousands of different types are sought after; the most spectacular and rare pieces can realize millions of dollars at auction. As with many technological and artistic traditions the minting and design of coins in Europe borrowed from the Roman Empire, specifically the use of a ruler’s portrait for the obverse (“heads”) side and varying imagery on the reverse (“tails”) side. Though this style was not universal, a vast majority of coins utilized this format and also integrated lettering in Latin using abbreviations to extol the titles and holdings of the personage in whose name it was struck. Starting in the 15th century of the Christian era numeric dates began appearing on coins making for even easier identification, although this was not universally adopted until a few centuries later. By using a combination of the monarch on the obverse and whatever date is on the coin you can begin to narrow your search to where that monarch ruled and had coinage minted. Certain areas can certainly be more difficult to identify than others, the various Italian and German states specifically leap to mind, but overall the major powers of Britain, France, Spain and even Scandinavia and Russia used essentially this format. As always there are exceptions. For example, in the cantons of Switzerland where there was no ruling monarch, coins were minted with icons or heraldry of the canton alluding to their places of origin.

The coinage of the New World, due to its mass colonization by European powers (particularly Spain), has a numismatic legacy very closely tied to its forebears. Through vast explorations and system of colonies, Spanish conquistadors and their successors discovered rich veins of precious metals throughout what would become known as Latin America. Wherever they established regional capitals, mints were built to produce coins in the name of the king who ruled the land from afar. These mints were identified by a specific monogram or mintmark. No other colonizing power produced coinage in the New World as zealously as the Spanish. From Mexico all the way down to Chile, the continents were dotted with mining and minting operations striking coins in silver and gold, most of which were loaded onto galleons and shipped back to Spain. Most well known of the coins produced was the 8 Reales referred to in literary works as the “Piece of eight.” The early 8 Reales, the gold 8 Escudos and their fractional denominations were cut from the ends of rolled bars of refined metal, adjusted to ensure they were of a proper weight and were then struck with two dies. One side showed the arms of Spain and the other a large cross. The somewhat irregular and sometimes lumpy looking pieces are known as “Cobs” from the phrase “Cabo de Barra” or “End of the Bar.” During the first half of the 18th century more advanced minting technology was brought to the New World mints and they began striking Columnarios. These were also known as Pillar Dollars as they featured the crowned Pillars of Hercules and two half globes alluding to the now worldwide empire that Spain had established. These coins were a more standard round shape and thickness and were of far nicer artistic quality than earlier pieces. After roughly a half century, the Columnarios were phased out and replaced by the style of European coins discussed above; a bust of the monarch is seen on one side with title and legends surrounding, and the arms of Spain on the other side. This style of coins persisted until the opening decades of the 19th century when Spain began to lose its New World colonies and the fledgling independent nations minted coins in their own right. These nations adopted different motifs and styles based on regional affinities but common among nearly all of them is the symbol of liberty. Sometimes this is in the form of a female, sometimes in the icon of a Phrygian cap. Identification of these coins is made easier by the use of Spanish rather than Latin in the legends and inscriptions, and the tendency to use the new country’s name on the coins. It would be wrong to assume that the entirety of New World coinage can be traced to the Spanish. Portuguese kings established a huge dominion in what is now Brazil and struck vast quantities of silver and gold coins at the mints of Bahia and Rio de Janeiro that are similar to the European format. The Caribbean is numismatically rich and offers some of the most interesting coinage found in the New World. While coins were not locally produced on the various islands, coinage from other colonies was altered by punching holes in the coins to lower their intrinsic value and keep them from leaving a particular island.

The rest of the world does not fall easily into one category, but offers a panorama of numismatic interest. Islamic empires in the Middle East conquered great swaths of territory from India all the way across northern Africa to Spain. Everywhere new kingdoms were forged coins were struck. Like it did in Europe, Islamic coinage adopted new styles and forms reflecting different areas and different peoples. While Islamic coins, which bear virtually no images and have inscriptions in Arabic or dialect thereof, can be difficult for even devoted western numismatists to decipher, they have a devoted following among collectors. Additionally, despite being many centuries old, Islamic coins are among some of the most beautiful and high quality gold coins in the world.

Beyond the world of Islam, many places in the world did not produce coins in the sense that we know them until the arrival of Europeans or the modern era. Much of the numismatic legacy of Africa, southeastern Asia and the Pacific coincides with the rise of imperialism and global trade routes. However, these areas have their own fascinating numismatic histories, which go well beyond the realm of typical coinage. The Kingdom of Thailand has a strong numismatic tradition of traded metal objects that goes back easily a millennia with their most common medium of exchange being the “Bullet Money” of the late 18th and early 19th centuries. These pieces were so named as they bear some resemblance to a musket ball, with a piece of metal folded back on itself into a roughly spherical shape and then stamped with dynastic marks designating the king under whom they were made. After prolonged contact with the west, Thai coinage was standardized in the latter half of the 19th century, with the Asian elephant being the central motif on nearly all of their coinage for about 50 years. In modern Micronesia, the tiny island of Yap is home to one of the most astonishing items of currency in the world. Belonging to what is generally known as Odd and Curious Money the traditional medium of exchange on Yap Island was large stones. In fact these aren’t stones at all but a form of quartzite which were quarried on Palau and then brought to Yap where their value was determined by not only their size but by how many people may have died to bring them to the island. Ranging in size from a few pounds to massive multi ton wheels standing ten or more feet high, they might not seem like coins but they were made for the clearing of debts public or private. Yap Stones may be the most well-known currency in the odd and curious category, but that term also applies to shell and tooth necklaces traded on Papua New Guinea, glass beads made in Europe and traded to indigenous peoples of western Africa and North America, boat-shaped silver ingots in China, or thin copper axe heads cast by pre-Columbian societies in Central America. All of these have been identified as items created for the storage or transfer of wealth and/or prestige and offer just as much insight into the humans who created and used them as the finest European gold coin.

While this is but the briefest and most cursory of overviews on world coins, we hope it has opened your eyes to the vast world of coinage enjoyed by collectors. Whether a person is driven to collect by artistic appreciation, historical fascination or just the itch to build a complete set, world numismatics can offer all of that and more. Additionally, the book of world coin knowledge is lengthy but is far from finished, and exciting new information and understanding is uncovered every year. We hope the above information has been helpful in your numismatic inquiry and we encourage you to continue your search for better understanding of your world coins. As with so many quests for knowledge, the journey can be more satisfying than the result. For more information please feel free to contact one of our world numismatics experts through this website.