For the first couple generations of American coinage, the $10 gold coin represented the largest denomination in circulation.  It picked up the nickname of the gold eagle.  In 1849 The United States Mint first minted $20 gold coins.  So despite being a bit cumbersome, numismatists refer to $20 gold coins as double eagles, $10 coins as eagles, $5 coins as half eagles, and $2.50 coins as quarter eagles.  It may come as a surprise that there was a minting gap between 1804 and 1838 for the $10 gold coin.

Early $10 Gold Coins (1795-1804) – These are known as Liberty Cap gold coins.  There are two different design styles.  The reverses of 1795, 1796, and some 1797 coins have a small eagle layout.  Some 1797 coins and all years 1798 to 1804 have a reverse showing an eagle with shield.  Generally speaking, coins from the first design type are worth about three times more than the later design.  Of course each coin should still be evaluated on its own individual merits.  Ten dollars represented a relatively large sum of money in the 1790s and early 1800s so these were not handled by the average American frequently.  Mintages were also low, with an average being around 12,000 per year.  A big reason that the $10 denomination was phased out until 1838 is that a lot of the coins were being used to buy overseas merchandise and the coins were either melted or never made it back to the United States for use.  So essentially the U.S. mint was producing all of these coins that either rarely got used within its borders or were destroyed completely.  That is a big reason these early ten dollar gold eagles are rare today.

Coronet Head $10 Gold Coins (1838-1907) – This was a long-lived series that some might find boring.  However, there are some challenging ways to collect these Liberty Head aka Gold Eagle coins.  Putting together a complete set from all branch mints can be done, but it is an expensive and time-consuming endeavor.  Most any $10 gold coin minted before 1880 is worth a serious investigation as there are many scarce years.  Anything minted after 1880 (with a few exceptions like some New Orleans and Carson City coins) will have a value based largely on the condition of the coin.

Please contact us with pictures of your $10 gold coins and we can get you values and more information about how much they are worth and what we can pay for them.  Info@Coinappraiser.com 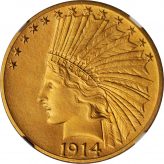