Half dollar silver coins are popular with collectors for a couple of different reasons.  First off, it is not cost prohibitive to put together a complete type set.  A type set means a collection that consists of one example of all of the different major half dollar coin designs.  The half dollar is also a fairly large coin.  So you can enjoy the coins in hand without magnification.  It is rare to see a half dollar in circulation today (not that the coins themselves are rare).  It is worth mentioning that all circulation strike Kennedy half dollars from 1971 and later are just worth their face value of 50 cents.

How much silver is in an old half dollar?  There is no quick cheat sheet to instantly know the value of any half dollar silver coin.  However, it is helpful to know the silver content for 50 cent coins minted after 1891.  Every half dollar minted for the years 1892 to 1964 has .361 ounces of pure silver in it.  So you can take the price of silver per ounce and multiple it by .361 to get the “melt” value of the half dollar.  It is important to remember that many coins will have circulated to the point that they have lost some silver content so they will be worth less than melt.  Other coins will be in nice condition and rare because of their year and mint mark; those high grade and rare coins will be valued based on their collector value and not their silver value.  With that said, the majority of older half dollars you might find tucked away in a relative’s sock drawer are likely just worth their silver weight.  It is also worth mentioning that JFK half dollars from 1965 to 1970 are made up of 40% silver instead of 90% silver.

What are the rarest silver 50 cent coins?  If you don’t count over-dates, proofs, and strange varieties then the rarest half dollar coin is the 1873-S with no arrows.  None of those coins are thought to have survived.  The rarest coins that still exist are the 1796 and 1797 halves.  Seated liberty half dollars from 1878 to 1890 have some low mintages and are generally tough to find.  It is important to value each coin on its own individual merits.  Please read our guides below for more information.  And keep in mind that you can reach us by email at Info@Coinappraiser.com if you would like to sell your coins. 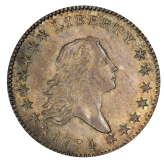 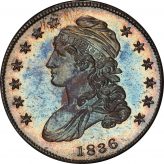