The ten cent denomination, called the dime, was not issued until 1796, making it two to three years behind most other denominations.  Generally speaking, the dime lags behind (in terms of popularity) when compared to larger coins like the quarter, half, and silver dollar.  And it doesn’t have the many different varieties that early copper coins do.  It would probably be fair to say that dimes are less popular than other coin series because of those two reasons.  However, there are certainly plenty of old dimes worth lots of money.

Draped Bust Dimes (1796-1807) – These are rare coins.  Years 1796 through 1804 had mintages ranging between 8,265 and 34,640.  These were issued at a time when basically no one in the United States collected coins.  It is very unusual to find a dime from the early mint history in uncirculated condition.  Even ugly coins from this time period are worth a few hundred dollars.  Nice examples will sell for a few thousand dollars or more.

Liberty Cap Dimes (1809-1837) – There is no single year from the Liberty Cap Dime series that is amazingly rare besides 1822.  The 1829 curl base 2 is a rare variety to be aware of.  Otherwise, these coins are mostly just valued based on their condition.  Something in rough condition might only bring $5, but the same coin in an MS grade could be worth several hundred dollars.

Seated Liberty Dimes (1837-1891) – The most well-known and the most valuable dime is the 1873-CC no arrows dime.  That means it is from the Carson City mint and the date does not have an arrowhead on each side of it.  There is another much more common 1873-CC dime with arrows.  View all of these coins with some skepticism since they could be altered or outright counterfeits.  Only a single 1873-CC no arrows dime is confirmed to exist; however, another has been reported as floating around.  The original mintage was 12,400, but based on the survival rate, clearly not all of that total was released for circulation.  Most seated liberty dimes are found in very heavily circulated condition today.  Each coin should be valued based on its condition, year, mint mark, and variety.

Barber Dimes (1892 – 1916) – The Barber dime is probably the oldest dime that the casual observer is going to know a little bit about.  Most of these coins are found in slick condition with most of their original detail gone.  A high grade Barber is an exceptionally attractive coin and one that any collector can appreciate.  The rarest circulation strike for this series if the 1895-O.  Only 440,000 were minted.

Mercury Dimes (1916 – 1945) – If you don’t know anything else about Mercury dimes, just remember to look for the 1916-D coin.  Only 264,000 of the 1916-D date were minted.  A huge warning is that there are far more counterfeit and altered 1916-D coins on the market today than there are legitimate examples.  Most collectors are looking for attractive and high grade Mercury dimes.  Your standard circulated Mercury is only worth its silver value.

Silver Roosevelt Dimes (1946-1964) – Any Roosevelt dime minted before 1965 is going to have a 90% silver content.  That is the only thing that makes these coins valuable.  Even coins in perfect condition just trade for their silver value.

Please give us a chance to make an offer on your dimes.  We are interested in older types, rare date and mint marks, or large silver hoards.  Please contact us via email for a quote.  Info@Coin.com 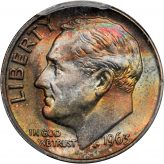