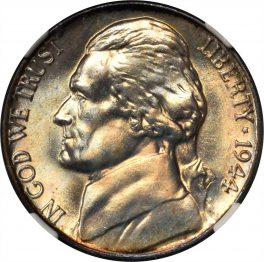 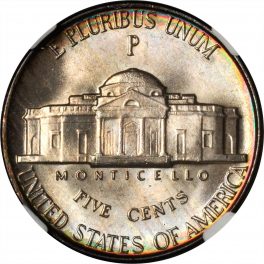 During the War Years in the United States, the Jefferson War Nickels were manufactured with a small percentage of silver as to conserve the nickel supply. Nickel was used strategically for military purposes. So, in 1942, the nickel content of the coins was eliminated. These coins were produced up until 1945. Most coin operated machines had detectors within them that could tell if a coin was authentic. The Mint had to carefully compose the alloy of silver and copper so that the machines would still accept the coins. That is one of the main reasons that the coin was not 90% silver like many of its counterparts. To help distinguish the new coins, the mintmark was moved to above the Monticello on the reverse.

Most of these coins will be extremely dirty, worn down, and dark. These coins will bring a small premium, but not nearly as much as an uncirculated, full step coin. If you find a gem that looks clean, preserve that coin. If you are interested in learning more about Jefferson War Nickels or would like to have an expert look at your special nickel, please contact us. In high grades, we will be able to make a competitive offer.

Why Does My Graded Nickel Say “FS”?

The Jefferson Nickels have two distinct designations. The letters FS stand for Full Steps. This is the grading company’s way of showing that this coin has an exceptional strike. Sometimes, FS may be preceded by a 5 or 6, showing how many steps are visible.

Above, on the left, is a coin with a standard strike. This standard strike is good but weak around the steps area. This coin would not receive the FS designation because the horizontal lines that make up the steps do not extend across the entire staircase. It is important that the lines extend the entire length of the staircase without being impeded for the coin to receive the FS.

Above, on the right, is a coin with the Full Step designation. This coin shows five complete lines extending across the staircase. Since there is no break in the line, this coin is called “5FS.”