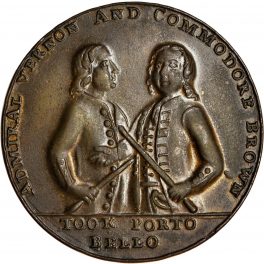 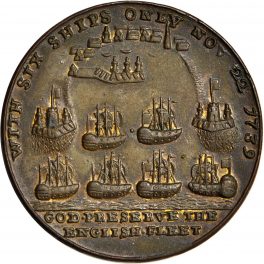 This medal celebrated Admiral Edward Vernon overtaking Porto Bello, a vital Spanish port in Panama. Vernon overtook the harbor with six ships, as he had boasted to Parliament. Commodore Charles Brown, second in command, ruthlessly battered the Spanish fort until they surrendered and his actions helped the British win. The English celebrated the victory with many similarly designed medals. The obverse of this medal features a half-length figure of Vernon on the right, facing three-quarters to the left, a baton in his left hand. Brown stands at the left facing right, also holding a baton. Obverse legend states, “Admiral Vernon and Commodore Brown” and in exergue “took Porto Bello”. Reverse depicts the six ships entering the harbor, with three of the ships sailing right and three sailing left. The legend states, “With six ships only Nov 22 1739” and in exergue “God preserve the English fleet”. Two steeples point at the “s” and between the “ly” and three boats are seen in the harbor.

The obverse and reverse text read as follows: Admiral Vernon and Commodore Brown; Took Porto Bello | and | With Six Ships Only Nov 22, 1739; Preserve the | English. Fleet.