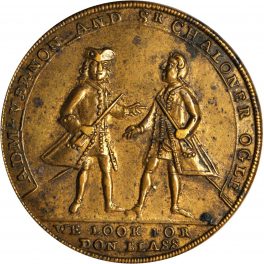 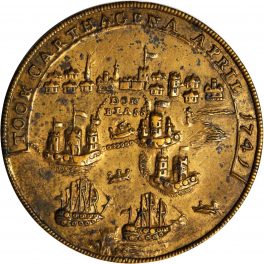 This medal celebrated what was deemed Admiral Edward Vernon’s success over the Spanish. The English celebrated his victories with many similarly designed medals. In actuality, the British lost the battle at Carthagena and suffered heavy losses. Obverse depicts Vernon on the left facing British Naval Commander Sir Chaloner Ogle who stands on the right facing forwards. Vernon wears a suit, and hat while extending his left hand and holding a baton in his right. Ogle carries a baton in his left hand and his right hand is extended. The legend around the two men states, “Admiral Vernon and Sir Chaloner Ogle” and in exergue, “We look for Don Blas”. Reverse depicts two ships sailing towards a fort, while two forts in the center are connected by a chain behind which is a small boat. The city is in the background and the flagstaff points up at the legend, which reads, “Took Carthagena April 1741”.

The obverse and reverse text read as follows: Adml Vernon and Sr Chaloner Ogle; We Look For | Don Blass | and | Took Carthagena April 1741.