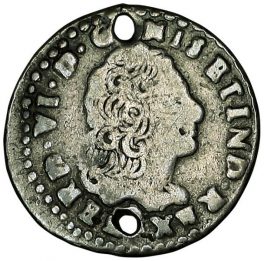 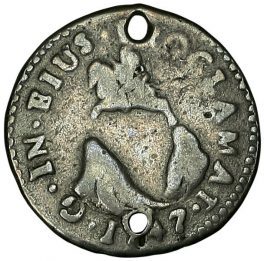 This medal celebrates Spain in Guatemala in 1747. Obverse features a full-figure of the king of Spain, Ferdinand VI, facing to the right, wearing only a wig. Around his image translates, “Ferdinand VI, by the grace of God King of Spain and the Indies”. The legend is poorly centered and not all of it is apparent. Reverse displays the arms of Guatemala, which feature two mountain peaks and leaping between the two is a man on horseback. The horse is stretched out touching the two mountains. Around the image translates, “Guatemala on his proclamation” and at the bottom of the medal is dated, “1747”. Like the obverse, the reverse is poorly centered and not all of it is visible. There is no artist signature on this medal.