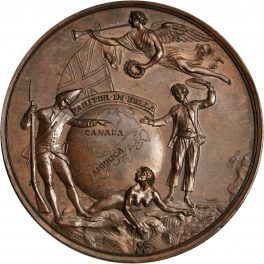 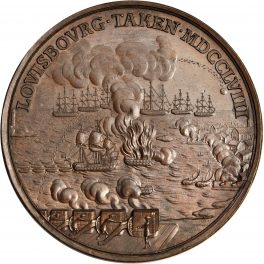 During the French and Indian War, the British attacked the Louisbourg Harbor and defeated the French. These medals celebrate the second attack and British victory. Obverse features four figures, a naked woman, a soldier, a sailor, and Fame, surrounding a globe that indicates Canada and America. Fame holds a trumpet and a laurel wreath as she flies over the scene. The legend states, “Equally brave in war”, which alludes to the equality and bravery of navy and foot soldiers in battle. Reverse displays the battle of Louisbourg viewed from the battery and looking out at the sea as the eight British ships advance. The reverse legend states, “Louisbourg Taken 1758”.

1758The Taking of Louisburg Medal

The Taking of Louisburg Medal