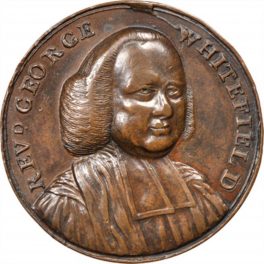 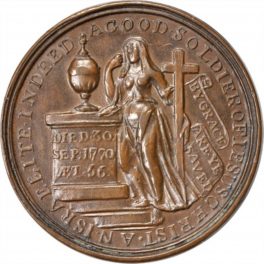 This medal commemorates the great speaker, Reverend George Whitefield upon his death in 1770. Obverse displays a bust of Whitefield, facing three-quarters to the right wearing a tightly curled wig and the band and robes befitting the clergy. The legend states, “Revd, George Whitefield”. The reverse displays a woman as Faith, standing near the right and supporting a cross while leaning on a tomb upon which rests an urn. The legend around the scene reads, “An Isrealite indeed, a good soldier of Jesus Christ.” Behind the cross a scroll reads, “By grace are ye saved” and the tomb reads, “died 30 Sep 1770 t 56.”