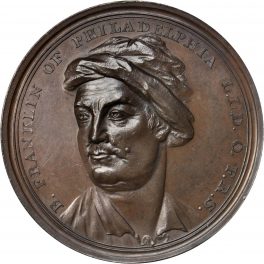 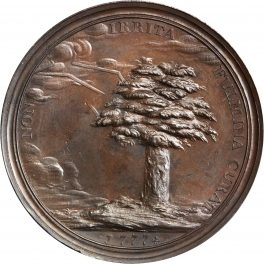 History, Information, and Value of 1777 B. Franklin of Philadelphia Medal

Value of 1777 B. Franklin of Philadelphia Medal

This Benjamin Franklin medal displays a bust of Franklin on the obverse facing three-quarters to the left wearing a draped cloth and a loose cap. The legend reads, “B. Franklin of Philadelphia L.L.D. & F.R.S.” The reverse legend translates, “He cares not for the ineffectual thunderbolt” and in exergue the year, 1777. The image on the reverse depicts two bolts of lighting coming from a cloud at the left striking a tall tree on the right. There are fewer than 25 surviving medals in existence today and the majority of them are damaged in some way. The piece was probably struck in Britain, as estimated for the use of a “j” as a “1” and for the design and texture which are very British in appearance.