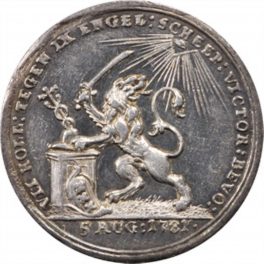 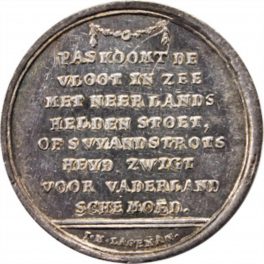 This medal commemorates the battle of Doggersbank, which took place on August 5, 1781 and was fought between the Dutch and the British navy. The Dutch won and created this medal to commemorate their victory. The obverse features the lion of Batavia, holding a sword and caduceus next to an altar which props up a shield bearing the arms of Amsterdam. In the sky above shines the All-Seeing Eye. The legend reads, “Seven Dutch vessels won a victory over nine English ships, Aug. 5, 1781.” The reverse bears an eight-line inscription that translates, “Liberally, Hardly had the fleet got to sea, with its brave sons of the Netherlands, when the arrogance of the enemy sank out of sight before their patriotic courage.”