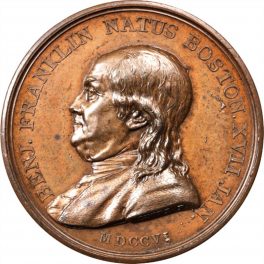 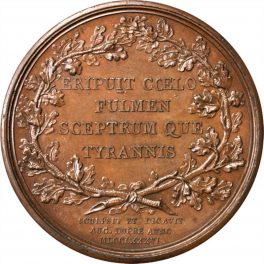 Benjamin Franklin is the central figure commemorated on this rare medal. Obverse features a bust of Franklin, facing to the left. The legend around his head states, “Benjamin Franklin, born at Boston Jan. 17,1706.” The reverse displays a wreath of oak leaves, which surround an inscription, which reads, “He snatched the thunderbolt from heaven and the scepter from tyrants”. The exergue reads, “Aug. Dupre engraved and issued this, in the year 1786.”