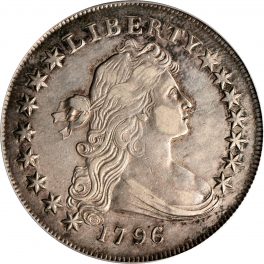 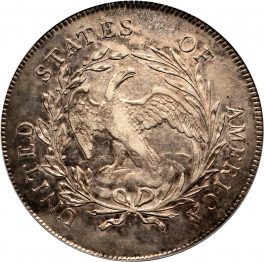 This Dollar has the catalog numbers: Bowers Borckardt-66, Bolender-1, or Haseltine-1

Obverse: Small date; the 9 and 6 closer together than other figures. Highest wave of hair under upright of E; second highest wave under and slightly to the right of the middle of R. End of hair tress touches innermost point of star 1 on its right, and continues slightly past it. The curly lock closest to the date barely touches the star point to the right of the innermost point of star 1. On BB-66, star 1 points at a dentil. A point of star 15 points to a spot high on the drapery folds.
This obverse bears a close resemblance to the obverse of BB-63, and specimens should be compared to it. This and the obverse die used to strike BB-61 and BB-62 were the first two obverse dies cut in 1796, and have the lower right tip of the R in LIBERTY intact.
Reverse: Described under 1795 BB-51, herewith repeated: Small Eagle. Small Letters in legend. Eagle stands on clouds. Wreath is composed of a palm branch and olive branch, the latter with seven berries. Berry under A of STATES; a quick way to identify this reverse.
Total Estimated Population: 200 to 350