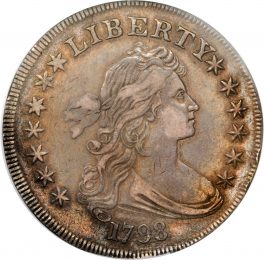 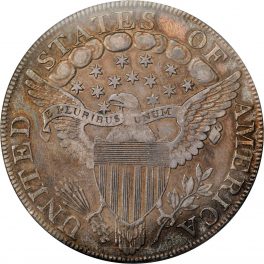 This Dollar has the catalog numbers: Bowers Borckardt-125, Bolender-8, or Haseltine-8

Obverse: Stars on right very close to Y and bust. Long vertical die flaw in center of left obverse field (best seen on strong VF or better pieces). Rounded-off bottom to 7. Die “dot” near edge between two dentils above left part of T in LIBERTY. 9 shows slight doubling at top. A crack from lower right part of E to hair. On the left, more space between stars 5 and 6 than between any others. On the right, more space between stars 8 and 9 than between any others. The obverse stars at the left gradually weaken from die failure, and examples can be found appearing to have only 12, 11 1/2, 11, 10 1/2, 10, or 9 stars. Such pieces are sometimes sold as damaged coins as they appear, to the untrained eye, to have been plugged.
Reverse: Only four berries, and these are large. The only four-berry reverse of the year. Arc star pattern. Star ray at eagle’s lower beak; another ray of same star points to between B and U, closer to U. Rightmost star is misoriented and has two rays toward the top of the coin, instead of the normal vertical orientation of one ray pointing straight up and the other straight down, the only such skewing of a star on the reverse of a 1798 dollar. Nearby star under cloud 7 is considerably tilted. 12 arrows plus one detached head; two rightmost arrows are overlaid with other arrows, with heads part way down each shaft, as is another arrow near the middle; fifth arrow from right is tiny and misformed. Light crack from border through upper left part of E in STATES. Point of leaf under left upright of I in AMERICA. The reverse is often weak, especially at the lower part of TED and at the right corner of the ribbon.
Total Estimated Population: 850 to 1,500