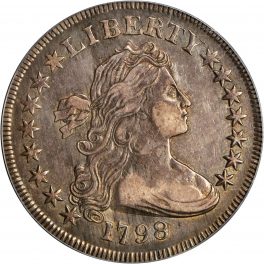 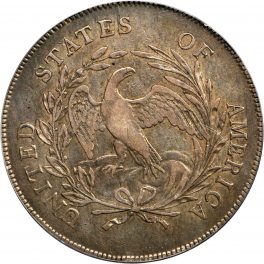 This Dollar has the catalog numbers: Bowers Borckardt-81, Bolender-2, or Haseltine-2

Obverse: 15 stars. The only 1798 dollar with 15 stars. Undoubtedly, this die was made in 1795 or before June 1796, during which time 15 stars were standard; the die was complete except for the date. In 1798 the uncompleted die had the date added and was used to coin this variety. The highest wave of hair is incomplete, probably from relapping, which also caused certain lower hair curls to be incomplete. B and R in LIBERTY each tilted slightly right.
Wide numeral 8 in date; with top interior space of 8 a horizontal oval and the bottom a circle; a punch unique to this obverse, not used elsewhere in the early dollar series.
Reverse: Same obverse die that was used for BB-51. Small Eagle. Small Letters in legend. Eagle stands on clouds. Wreath is composed of a palm branch (right) and olive branch (left), the latter with seven berries. Berry under A of STATES; a quick way to identify this reverse. This identical die, now relapped, was used in combination with six obverses during its life. The definition on the reverse is weak, due to the lapping of an already shallow cut die.
Total Estimated Population: 500 to 900