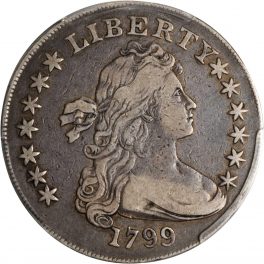 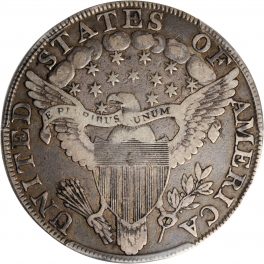 This Dollar has the catalog numbers: Bowers Borckardt-151, Bolender-13, or Haseltine-13

Obverse: Irregular date, per traditional nomenclature, although the “irregular” feature is more notable in the telling than in the seeing. Both 9s are improperly placed, the first is tipped too far to left at top, the last 9 too far to right at top. It has been suggested by Walter H. Breen that a Draped Bust obverse die was made in 1798, but with date incomplete and as 179 only; later to be finished by adding another 9 in 1799. A ray of star 13 touches bust. On the left, stars 3 and 4 are wider apart than are any others. On the right, stars 10-11 are closer together than are any others. Perfect die without cracks.
Reverse: Die “dot” above E in STATES, and die flaws inside upper part of same letter. Die flaws appear between and under two lower stars farthest to right. Star is close to eagle’s beak, and barely escapes touching its upper part; ray points to right side of B in PLURIBUS. Leaf points to center of I in AMERICA. A touches fourth feather of right wing. Far right edge of A is over junction of clouds 3 and 4. The upper two berries are closest and the bottom two berries are very large. All seen are weakly struck at their centers.
Total Estimated Population: 40 to 75