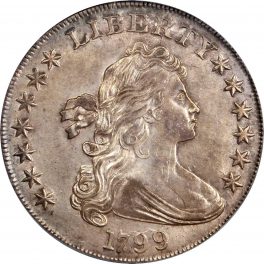 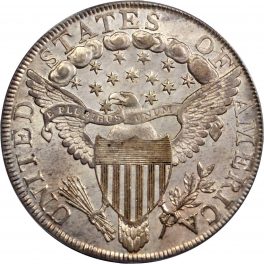 This Dollar has the catalog numbers: Bowers Borckardt-158, Bolender-16, or Haseltine-16

Obverse: Left stars distant from curl and L; star 7 is farther from L on this than on any other obverse of the year. Right stars close to Y and bust. This die is quickly recognized by keeping the above in mind. Numerals 1 and 7 closer together on this than on any other 1799 obverse. Star 1 is about 2 mm. distant from curl, and star 7 is just as far from the L. Star 8 is quite close to Y, and star 13 almost as near to bust. Star 6 has raised die defect or trace of extra ray to left of topmost ray.
Reverse: U in UNITED defective at upper left part, which is cut off, due to employment of a defective U punch. Point of star touches point of lower part of eagle’s beak; ray points to left serif at left side of U in PLURIBUS. Star under cloud 1 is noticeably smaller than any other. A in AMERICA rests on fourth feather. Leaf point is under left side of upright of I. Upper right star has only one point touching cloud 8 (whereas two points of this star touch the cloud on the BB-157 reverse). Far right edge of A is over junction of clouds 3 and 4. Berries boldly defined in branch for Die State I, with the one at top left being the smallest. Berries weaker in Die State II.
Total Estimated Population: 850 to 1,500