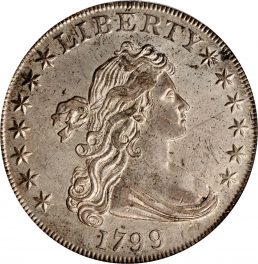 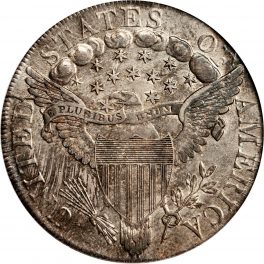 This Dollar has the catalog numbers: Bowers Borckardt-161, Bolender-11, or Haseltine-11

Obverse: The obverse die was originally used on BB-156. Perfect, without cracks.
Reverse: No berries. U in UNITED defective at upper left part, which is cut off, due to the employment of a defective punch. Point of star touches point of lower part of eagle’s beak; ray points to left serif at left side of U in PLURIBUS. Star under cloud 1 is noticeably smaller than any other. A in AMERICA rests on fourth feather. Leaf point is under left side of upright of I. Upper right star has only one point touching cloud 8. Far right edge of A is over junction of clouds 3 and 4. No berries on branch, as the die was reground earlier. This is the terminal state of this die, after having mated with four obverses including this one.
Total Estimated Population: 600 to 1,100