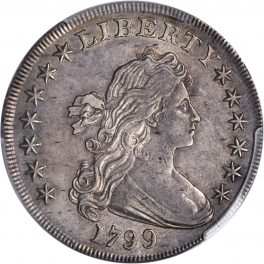 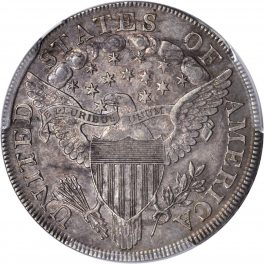 This Dollar has the catalog numbers: Bowers Borckardt-167, Bolender-14, or Haseltine-14

Obverse: Two raised die flaws in field, or “tears,” before eye, one very clear. The smaller is in the field close to and opposite to the bottom of the forehead, just above the bridge of the nose. The larger and by far the most notable is in the field about 40% of the way from the nose bridge to star 9. On some lower grade coins these “tears” are not visible. Last star near bust and a little closer than eighth star is to Y. seventh star farther from L, and first star nearly 2 mm. from curl. Stars 11, 12, and 13 point to spaces between dentils. Small die flaw in field to left of ray of star 8 closest to bottom of Y. The last 9 is about as near bust as star 8 is to Y. Die flaw from outer point of 10th star. All examples are weakly struck on the hair.
Reverse: Die flaws under AM, between two lower stars just back of eagle’s head, between the F in OF and the wing tip, and one below the D in UNITED. Point of star touches point of lower part of eagle’s beak. Another point of same star points to space between B and U of PLURIBUS. Far right edge of A is over junction of clouds 3 and 4. Leaf points to center of I in AMERICA. A does not touch feathers of right wing, but is near 3rd feather. Die crack through upper part of AME.
Total Estimated Population: 400 to 700