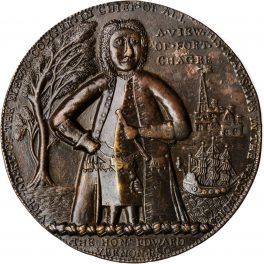 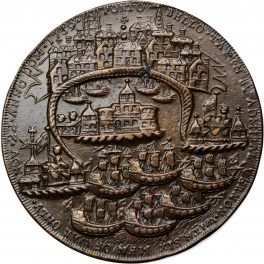 This medal celebrated Admiral Edward Vernon overtaking Porto Bello, a vital Spanish port in Panama. Vernon overtook the harbor with six ships, as he had boasted to Parliament. The English celebrated the victory with many similarly designed medals. The obverse depicts half-length image of Vernon facing forwards, his baton in his left hand. Behind him are a ship and a fort at his right, and a tree on his left. Around the image states, “Vice Admiral of the Blew & Commander in Chief of all his Mai ships in the West Indies” and in exergue, “The Honorable Edward Vernon, Esq.” In the right field is written, “A view of Fort Chagre”. Reverse depicts six ships all sailing right as they sail into the harbor towards four smaller boats. The harbor is depicted at the top of the medal with the buildings pointing towards the legend. The legend states, “Porto Bello Taken By Admiral Vernon with six men of war only. Nov. 22 Anno Dom 1739.” While dated 1739, this medal was struck later.

The obverse and reverse text read as follows: Vice Ad : rl: of the Blew: & Com : er In Chief of All his Mai : Ships In the West Indies; The Hon Edward Vernon Esq.; A View of Fort Chagre | and | Porto Bello. Taken by Admiral Vernon. With Six Men of War Only. Nov. 22 Anno Dom. 1739.