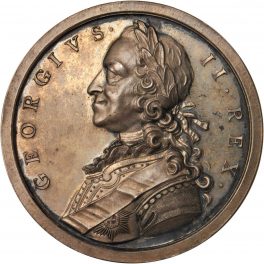 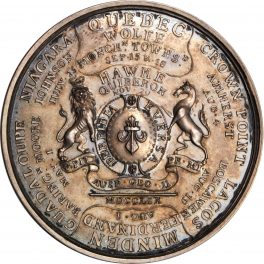 The British created this medal in response to a French medal that listed French acquisitions throughout the world. Obverse features a bust of George II, facing to the left wearing a laurel crown, ribbon and star of the Garter. The reverse displays a lion and a horse holding up a shield with a fleur-de-lis stamped on it. The shield translates to, “Treachery Overthrown”. Around the image, in three circles, are the names of six places, the names of six commanders, and the dates of the victories. Four of the six victories are American: Guadeloupe, Niagara, Crown Point, and Quebec. The six commanders listed are Moore, Johnson Wolfe, Amherst, Boscawen, Ferdinand, and Quiberon. At the base of the shield is the year 1759.