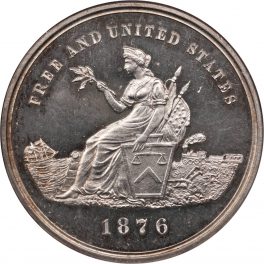 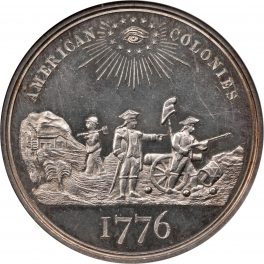 Diameter: 38.00 mm
Mintage/Proof: NA / 0
Weight: NA
Metal: Silver
I Own 1876 So Called Dollars Commemorative and Exposition
Add To My Collection
View My Collection

This So-Called Dollar is given the catalog number HK-56

The obverse text on this So-Called Dollar reads Free and United States 1876 and the reverse text is American Colonies 1776. The front side of the coin shows a background with a ship sailing on the water and a train. There is a plow in the foreground, along with a woman holding a branch while sitting on a keystone. The keystone has details inscribed into it that show scales to represent justice. The backside of the coin depicts three men in the center. The man in the center is pointing a finger and has his other hand on his sword. The man to his right is carrying an axe and walking towards the left side of the Dollar. To the man’s left is a soldier who is firing a gun and a cannon. Above the group of three men is the all-seeing eye with rays coming from it..

Liberty Seated and Bust of Washington in Brass