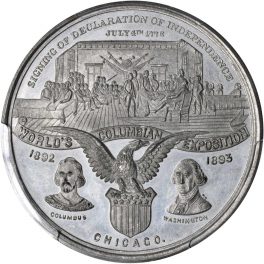 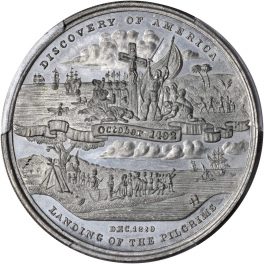 Diameter: 40.00 mm
Mintage/Proof: NA / 0
Weight: NA
Metal: Tin
I Own 1893 So Called Dollars Commemorative and Exposition
Add To My Collection
View My Collection

This So-Called Dollar is given the catalog number HK-157

The obverse text on this So-Called Dollar reads Signing of Declaration of Independence July 4th 1776, World’s Columbian Exposition 1892 1893, Columbus Washington Chicago and the reverse text is Discovery of America October 1492 Dec. 1820 Landing of the Pilgrims. The front side of the coin shows the signing of the Declaration in the upper portion of the dollar, with a centered eagle in the lower half and portraits of Columbus and Washington to either side. A long banner runs through the center of the coin. The backside of the coin depicts a banner running through the center of the reverse of the coin as well, with a date inscribed on it. Columbus’ landing is in the upper segment of the coin, and a man is hanging on the cross with boats and palm trees in the background. Below are Native American Indians welcoming the new Pilgrims to the new World. The boats are seen in the distance..