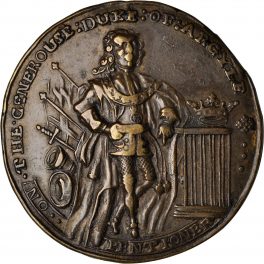 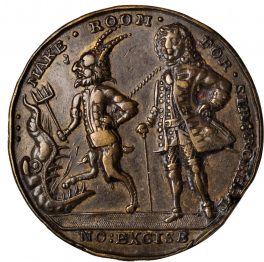 The obverse of this medal features the full-length figure of the Duke of Argyle. his right hand resting on his hip, and his left on a pedestal, which also holds a crown. Behind him is a trophy of flags. Around the image is written, “The generouse [sic] Duke of Argyle” and in exergue, “No Petitioner”. The reverse translates, “Make room for Sir Robert”. The image depicted is of Sir Robert, being pulled along by the devil towards a dragon. At the time the medal was distributed many opposed Robert Walpole, who is commonly regarded as the first Prime Minister of Britain.

The obverse and reverse text read as follows: The Generouse Duke of Argyle; No Petioner | and | Make Room for Sir Robert; No Excise.