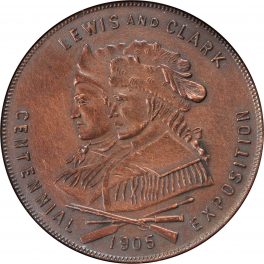 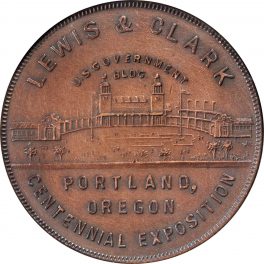 Diameter: 34.00 mm
Mintage/Proof: NA / 0
Weight: NA
Metal: Bronze
I Own 1905 So Called Dollars Commemorative and Exposition
Add To My Collection
View My Collection

This So-Called Dollar is given the catalog number HK-329

The obverse text on this So-Called Dollar reads Lewis and Clark Centennial Exposition 1905 and the reverse text is Lewis & Clark U.S. Government Bldg. Portland, Oregon Centennial Exposition. The front side of the coin shows two bust of men facing the left with guns and date below, descriptive text surrounding. The backside of the coin depicts three lines of text at the top and three lines of text at the bottom, all surrounding the building in the center, which is the U.S. Government Building.