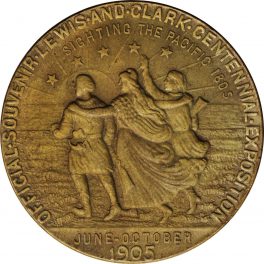 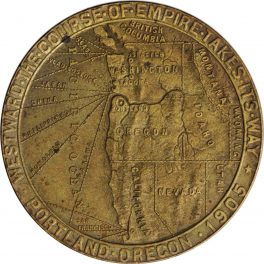 Diameter: 34.00 mm
Mintage/Proof: NA / 0
Weight: NA
Metal: Bronze
I Own 1905 So Called Dollars Commemorative and Exposition
Add To My Collection
View My Collection

This So-Called Dollar is given the catalog number HK-327

The obverse text on this So-Called Dollar reads Official Souvenir Lewis and Clark Centennial Exposition, Sighting the Pacific 1805, June-October 1905 and the reverse text is Westward the course of empire takes its way, Portland, Oregon 1905. The front side of the coin shows five stars over the heads of the three central figures walking towards the sun, there is text surrounding and text below. The backside of the coin depicts the West Coast of the United States with arrows and dotted lines running across the ocean with city names written over the map.