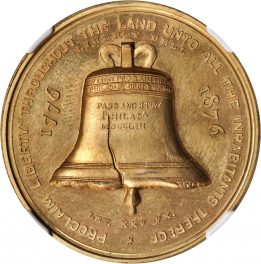 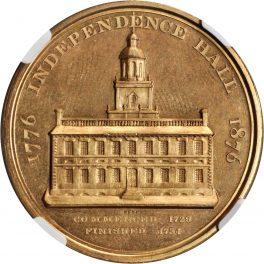 Diameter: 38.00 mm
Mintage/Proof: NA / 0
Weight: NA
Metal: Bronze
I Own 1876 So Called Dollars Commemorative and Exposition
Add To My Collection
View My Collection

This So-Called Dollar is given the catalog number HK-24

The obverse text on this So-Called Dollar reads Proclaim Liberty throughout the land unto all the inhabitants thereof, Liberty Bell, 1776 1876, Lev. XXV VX. Pass and Stow Philada MDCCLIII and the reverse text is 1776 Independence Hall 1876 Commenced 1729 Finished 1734. The front side of the coin shows an image of the Liberty Bell in the center with text surrounding the bell and the crack dominantly displayed. There are dates to either side of the bell as well as text written on the bell. The backside of the coin depicts a front on view of Independence Hall with the clock tower extending off the top of the Dollar. There is text surrounding the illustration including two dates to either side.