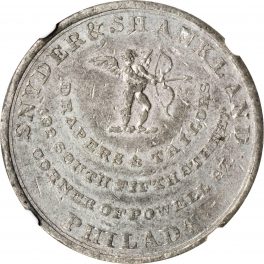 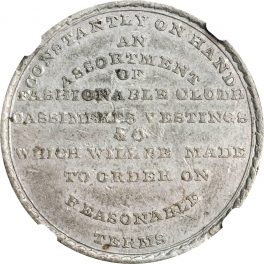 This Token Came From – Snyder & Shankland Drapers and Tailors Store

This token typically receives the Hard Times Designation of HT-C417.

The obverse text reads “Snyder & Shankland Drapers & Tailors 102 South Fifth Street Corner of Powell St. Philada.” and the reverse text reads “Constantly on Hand An Assortment of Fashionale Cloth Cassimeres Vestings Which Will Be Made To Order On Reasonable Terms.” The obverse of the token shows a small angel shooting an arrow and surrounded by text, and the reverse is filled with text.