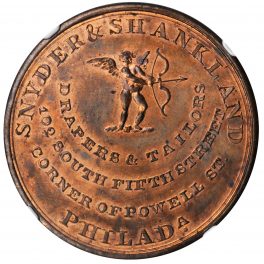 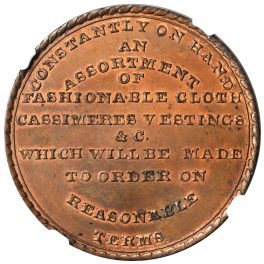 This Token Came From – Snyder & Shankland Drapers and Tailors Store

This token typically receives the Hard Times Designation of HT-A417.

The obverse text reads “Snyder & Shankland Drapers & Tailors 102 South Fifth Street Corner of Powell St. Philada.” and the reverse text reads “Constantly On Hand An Assortment of Fashionable Cloth Cassimeres Vestings & C. Which Will Be Made To Order On Reasonable Terms.” The obverse of the token shows a cherub holding a bow and arrow, and the reverse has several lines of text.