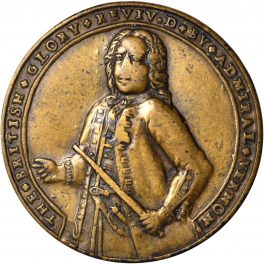 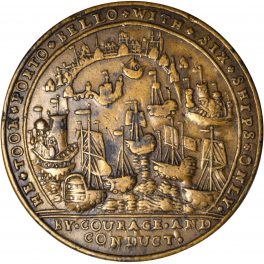 This medal celebrated the accomplishment of Admiral Edward Vernon overtaking Porto Bello, a Spanish port in Panama that oversaw the shipping of gold and silver back to Europe. Vernon overtook the harbor with only six ships, as he had boasted to Parliament. The English celebrated the victory with many similarly designed medals. The obverse of this medal features a half-length figure of Vernon, facing three-quarters to the left, his finger and baton pointing at the legend. The legend states, “The British Glory Reviv D. by Admiral Vernon” complete with a four-dot star separating each word. Reverse depicts the ships entering the harbor. The legend states, “He Took Porto Bello With Six Ships Only” and in exergue surrounded by scrollwork, “By Courage and Conduct”. Every word in the reverse legend is separated by a four dot star. The church steeple in the harbor points at the legend. This medal has faint water lines outside the harbor.

The obverse and reverse text read as follows: The British Glory Reviv D. By Admiral Vernon | and | He Took Porto Bello With Six Ships Only. 1739; By Courage and | Conduct. .