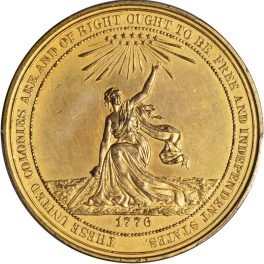 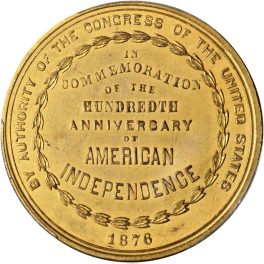 Diameter: 38.00 mm
Mintage/Proof: 10,500 / 0
Weight: NA
Metal: Gilt
I Own 1876 So Called Dollars Commemorative and Exposition
Add To My Collection
View My Collection

This So-Called Dollar is given the catalog number HK-22

The obverse text on this So-Called Dollar reads These United colonies are and of right ought to be, free and independent states, 1776 and the reverse text is By authority of the Congress of the United States in Commemoration of the Hundredth anniversary of American Independence 1876. The front side of the coin shows a draped female figure kneeling in the center and holding a sword. Her hand is lifted towards the rays and 13 stars at the top of the Dollar. A beaded boarder surrounds the imagery and that is surrounded by text. The backside of the coin depicts circular text surrounding 8 lines of text and a wreath made up of leaves.