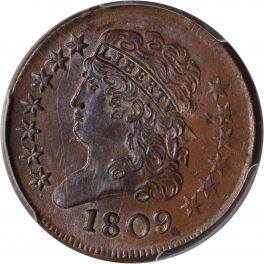 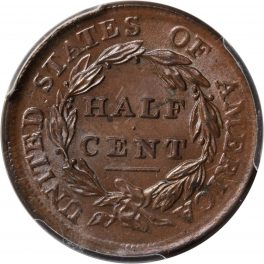 History, Information, and Value of 1809 Classic Head Half Cent

Whitman-1 | Normal Date | Cohen-1, B-2 | Breen dies: 2-B. | Only about 50 to 100 examples of 1809 Classic Head Half Cent, W-1 are known today, a small figure considering the variety was first discovered in 1954 by Richard Picker, a familiar name to old-timers in the early coppers disciplineãthat averages about one piece found per year since Picker’s discovery. Star 13 distant from the 9 of the date on this obverse, the reverse identified by the tip of the highest leaf that is even with the right edge of the final S of STATES. The finest known example of this rare variety is EF, and below that the grades are AG-3 to VF, the latter a rare grade in its own right. This coin was minted at the Old Philadelphia Mint. 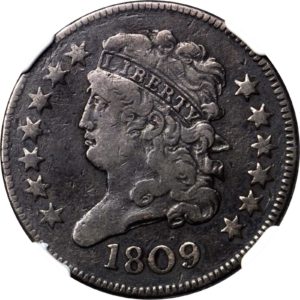 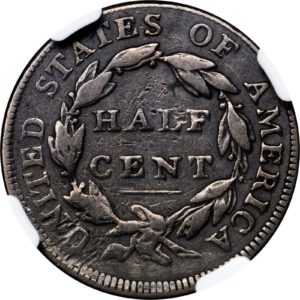 W-2 | Normal Date | C-2, B-3 | Breen dies: 2-C. | Somewhat more available than W-1, the scarce 1809 Classic Head Half Cent, W-2 variety has an estimated population of 200 to 350 piecesãexcept for W-1 all of the 1809 half cent varieties are much more plentiful than this variety. Same obverse die as W-1, reverse with highest leaf just to right of final S in STATES, a diagnostic for the variety. This variety is known in Mint State, but examples in that grade are considered extremely rare. 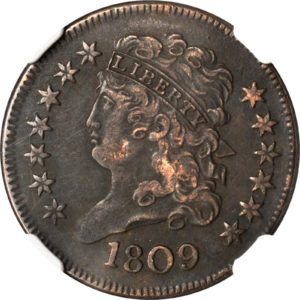 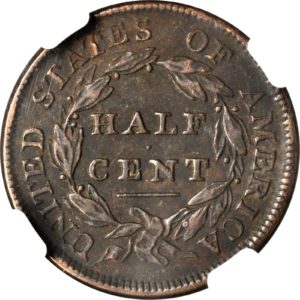 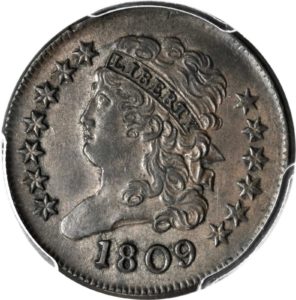 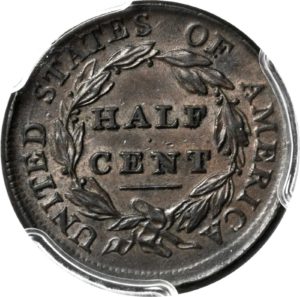 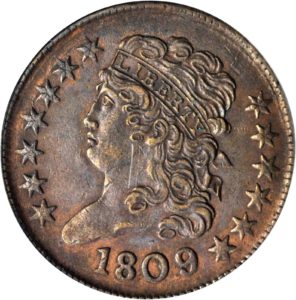 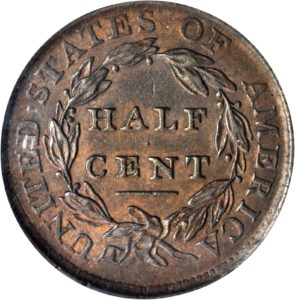 W-6 | Repunched 9 | C-5, B-5 | Breen dies: 4-D. | For many decades this variety was called _9 over Inverted 9 but today’s wisdom calls it simply a repunched 9. The reverse die is very similar to W-2 and 3 with the point of the highest leaf just past the final S in STATES. Estimates for this date’s population tend to be around 2,000 to 3,000 pieces and it is one of the most readily available varieties of the date as a result. Mint State examples of 1809 Classic Head Half Cent, W-6 are known but are considered very rare. 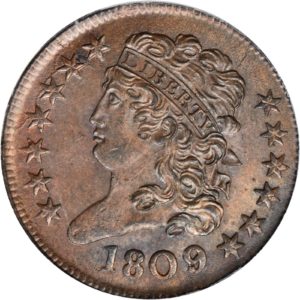 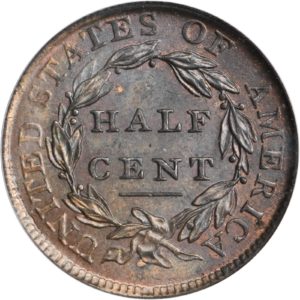 W-4 | Normal Date | C-6, B-6 | Breen dies: 5-E. | 1809 Classic Head Half Cent, W-4 is by far the most available of all the 1809 half cent varieties with perhaps 3,000 to 5,000 examples estimated to exist. On this obverse star 13 is distant from the 9 of the date while on the reverse the tip of the highest leaf is nearly halfway between the final S in STATES and the O in OF. Just about any grade desired can be found for this plentiful variety, including Mint State.

The text on the obverse of the coin reads “Liberty, 1809” and the reverse text on the Classic Head Half Cent reads “United States of America, Half Cent.” The obverse of the coin shows a womans bust facing the left with 13 stars surrounding her head and the date below. The reverse shows a full wreath surrounding the text in the center. These coins come in many varieties, so we recommend contacting one of our rare coin experts. If you are looking to sell coins, we can always help by giving you a rare coin appraisal. Coin appraisals are free of charge, so just send us a picture and one of our old coin experts will be in touch with you. We have the best rare coin price guide, and you can always trust us with your business!

Value of 1810 Classic Head Half Cent