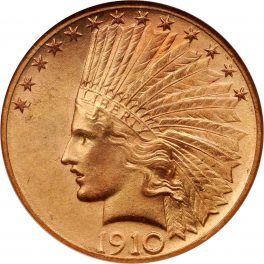 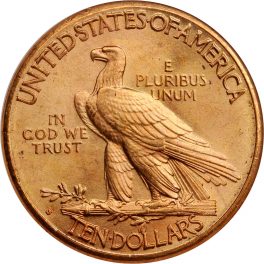 The 1910-S Motto Indian Gold Eagle generally comes well struck, although many exhibit a curious roughness to the texture along the lower left obverse border that affects the detail in the digits 19 in the date. Many other San Francisco Mint eagles of this type also display this feature, most notably the 1913-S. The typical Mint State survivor is frosty with somewhat granular surfaces, although several of the highest graded examples exhibit a more vibrant satin finish. With only a few exceptions, the 1910 San Francisco Mint coin is characterized by moderately to heavily abraded surfaces.
Despite having one of the highest mintages in this series, the 1910-S is one of the rarest Indian eagles in the finer Mint State grades. Most examples were destroyed through melting during the late 1930s, and although a few thousand pieces are believed extant, the vast majority is circulated to one degree or another. Most Uncirculated coins grade no finer than MS-62. Very scarce in MS-63, the 1910-S is rare in MS-64 and exceedingly rare any finer. Highest certified honors go to the single MS-66+ listed at NGC. One of the two finest known examples at PCGS is the William Thomas Michaels specimen sold through Stack’s auction of January 2004.