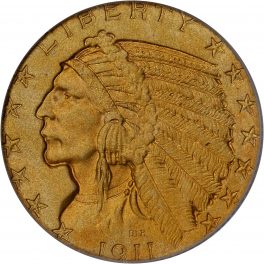 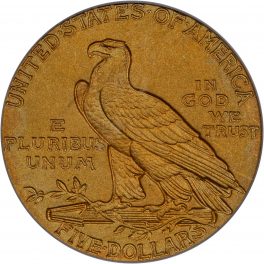 History, Information, and Value of 1911 Indian Gold Half Eagle

The 1911 Indian Half Eagle is among the more softly struck Indian half eagles, and the typical example displays a noticeable lack of detail to the center of the obverse portrait as well as the lowermost features in the headdress. The luster tends to be subdued with a somewhat granular texture. These factors, along with typically abraded surfaces, make the 1911 one of the more challenging half eagles of this type to locate with strong eye appeal.

This is one of the more common Indian half eagles in terms of total number of coins known with examples relatively plentiful in grades up to and including MS-63. Moderately scarce, yet obtainable in MS-64, the 1911 Philadelphia Mint gold coin is rare in MS-65 and all but unknown in higher grades. Exceptional examples include a couple of coins graded MS-66 by PCGS and NGC. This issue marks the Mints return to Sand Blast Proof half eagle production after the Satin Finish issues of 1909 and 1910. Although it is among the more frequently encountered Proofs of this type, the 1911 is still rare in an absolute sense with only 60 to 80 coins believed extant from a mintage of 139 pieces.