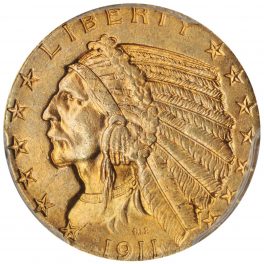 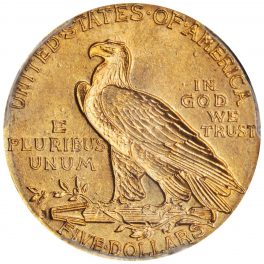 History, Information, and Value of 1911-S Indian Gold Half Eagle

Although generally well struck as an issue, several 1911-S Indian Half Eagles display minor softness of detail over the lowermost feathers in the Native American’s headdress. There are also a number of coins known on which the San Francisco mint mark is poorly defined. The typical Mint State example is lustrous, with a frosty texture. Liberally abraded surfaces are the norm.

At 1,416,000 pieces produced the 1911-S has the second highest mintage in the Indian half eagle series. Even so, it is moderately scarce in circulated grades and becomes genuinely scarce at lower Mint State levels through MS-63. Rare in MS-64, the 1911-S is seldom offered in Gem Mint State. One of the finest known examples has been certified MS-66 by PCGS and traces its provenance to the collections of Egypt’s King Farouk (sold by Sotheby’s as the _Palace Collection,î February 1954) and John Jay Pittman (auctioned by David W. Akers, October 1997).