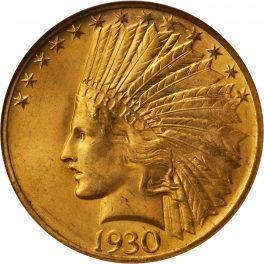 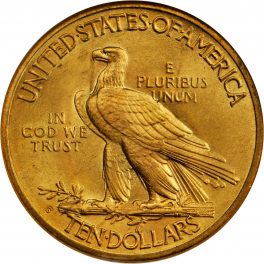 The typical 1930-S Indian Gold Eagle displays noticeable softness of detail in isolated areas. Many are lightly impressed at the central hair curls on the obverse and/or over the eagle’s left wing and trailing leg feathers on the reverse. Mint State survivors possess excellent satiny or softly frosted luster. While most display at least a few noticeable abrasions, it is easier to locate a relatively smooth-looking 1930-S than it is for the 1911-D, 1913-S, 1915-S and 1920-S.
With such a large number of coins struck in 1926, the federal government did not need any more eagles until 1930, when only the San Francisco Mint was called upon to strike coins. Few 1930 San Francisco Mint eagles found their way into commercial channels, however, and the majority of the mintage was eventually melted in the late 1930s after the gold recall. Today this is one of the rarest Indian eagles in terms of total number of coins extant, trailing just behind the 1920-S in overall rarity. Many survivors are circulated, but even in grades such as EF and AU the 1930-S is elusive. Mint State coins are rare, although with a concentration of examples at the Choice and Gem levels many of the survivors were likely obtained from the Mint or Treasury Department by contemporary collectors and other interested parties before the government stopped paying out gold coins at face value in April 1933. A couple of truly extraordinary examples have been certified MS-67 by PCGS and NGC, and the example in the National Numismatic Collection at the Smithsonian Institution is also a Superb Gem.